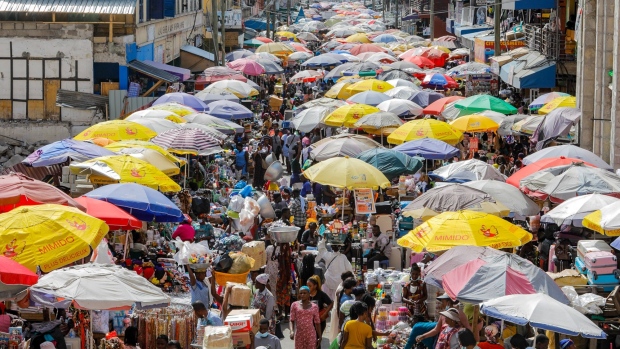 Ghana was downgraded by Fitch Ratings on mounting concern that the West African nation will seek a debt restructuring as financial stress worsens.

The nation’s credit score was lowered to CC from CCC by Fitch on Friday, just two notches above a default rating. High borrowing costs and the lack of access to international bond markets has weighed on Ghana, which may need to address its debt load in order to strike an accord with the International Monetary Fund, the rating company said in a statement.

“This will be in the form of a debt exchange and will qualify as a distressed debt exchange under our criteria,” Fitch analysts including Jan Friederich wrote. “There could be an incentive to spread a debt restructuring burden across domestic and external creditors.”

The nation is poised to start talks with domestic bondholders to restructure its local-currency debt as it works to secure a $3 billion loan from the IMF, Bloomberg reported on Tuesday. Ghana began engaging the multilateral lender in July for a three-year extended credit facility program after efforts -- including cutting discretionary state spending by as much as 30% -- failed to stem a selloff in its eurobonds and halt a record depreciation of the cedi currency against the dollar.

Ghana’s eurobonds sank to all-time lows earlier this week as investors weighed the local-debt restructuring plan. The nation’s notes, on average, have handed investors losses of 39% this year, compared to declines of about 20% in the Bloomberg index of emerging-market sovereign dollar debt.

Ghana is in a similar position as Sri Lanka, which defaulted on its foreign bonds earlier this year, said Kevin Daly, a portfolio manager at abrdn in London. Sri Lankan authorities said Friday they were planning to finalize external debt negotiations by the second quarter of 2023.

“External borrowing costs are at exorbitant levels, and the IMF is pretty much the only alternative these countries have in this environment,” he said in an interview earlier this week. “It does make sense to look at all of your debt stock, not just a portion of it.”