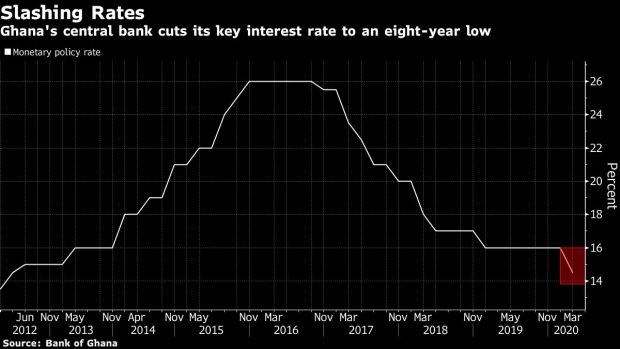 Ghana became the first sub-Saharan Africa country to cut interest rates in response to the coronavirus pandemic, reducing its benchmark to an eight-year low.

The monetary policy rate was reduced to 14.5% from 16%, the first cut since January 2019, the Bank of Ghana said in an emailed statement on Wednesday. The Monetary Policy Committee was originally scheduled to announce its decision on March 23.

Growth in gross domestic product could decline to 5% and could even slow to 2.5% in a worst-case scenario, said the central bank. The International Monetary Fund’s most recent growth forecast for Ghana was 5.6%.

Dampened global demand could significantly weigh on earnings from crude while export restrictions from advanced economies and emerging markets may create supply-chain shortages for Ghanaian businesses, said the central bank. This is expected to have “severe consequences” for economic growth and tax revenues, which could become more severe by the third quarter.

“These assessments are preliminary as the situation is very fluid and the degree of uncertainty concerning the outbreak is very high,” the central bank said. “This means that there is a likelihood that these assessments could change rapidly.”

Inflation, which measured 7.8% in February, is expected to remain within the target band of 6% to 10% for the next quarter, it said.

Central banks including in Nigeria, Kenya and Rwanda have so far announced measures from special loans to extending debt repayments in an effort to counter the impact of the virus on their economies. South Africa’s Reserve Bank is forecast to lower its key rate by as much at 50 basis points on Thursday.