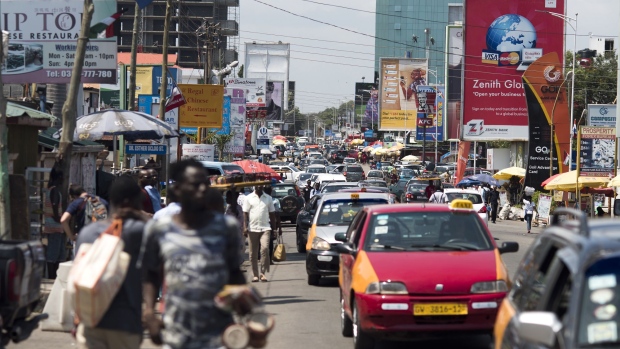 Road traffic passes business advertisements for Zenith Bank Plc and MTN Group Ltd. sit on a busy highway in Accra, Ghana, on Monday, Sept. 19, 2016. Ghana's central bank expects mergers and acquisitions among lenders to increase as regulators prepare new rules that will boost the amount of cash that they need to set aside. Photographer: Ty Wright/Bloomberg , Bloomberg News

The monetary policy committee lifted the cost of borrowing by 250 basis points to 24.5%, Governor Ernest Addison told reporters Thursday in the capital, Accra. That was more than the median estimate of nine economists in a Bloomberg survey for an increase of 150 basis points.

“Inflation remains elevated and the balance of risks is on the upside,” Addison said. The hike affirms the MPC’s commitment to “re-anchoring inflation expectations and returning to a disinflation path,” he said.

Ghana, like other central banks, is raising interest rates at the fastest pace in a generation to quell surging inflation, bolster its currency and attract capital flows from investors being lured by higher yields in the US. Ghana’s cedi has weakened 41% against the dollar this year, the world’s second-worst performer after Sri Lanka’s rupee. Annual price growth quickened to 33.9% in August -- the highest level since 2001.

The move brings cumulative rate increases to 10 percentage points this year, making Ghana the second-most aggressive central bank on the continent, after Zimbabwe. The hike adds to measures taken by the central bank at a surprise meeting in August to boost foreign-exchange reserves and support the cedi, along with fiscal steps taken by the government including approaching the International Monetary Fund in July for a $3 billion economic-support program to regain investor confidence.

A lack of demand at auctions of Ghanaian bonds, along with foreign portfolio-investment outflows, has resulted in the central bank funding the nation’s budget deficit, Addison said. “The monetary policy committee recognizes the fact that the current condition is sub-optimal” and will remain so until agreements are reached on an IMF-supported program, he said.

Ghana’s Finance Ministry and the Bank of Ghana commenced discussions with the IMF last week about the loan.

The talks with IMF have been positive and an early conclusion of the program discussions will help “re-anchor stability,” he said.