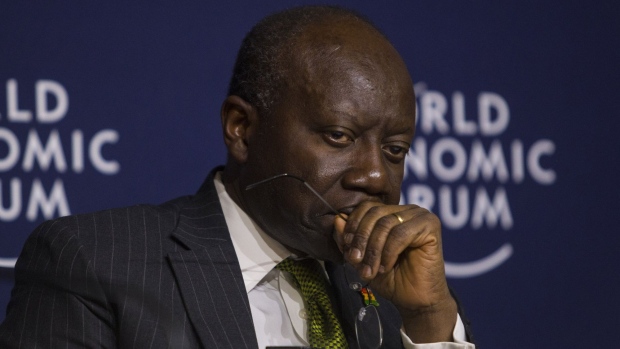 (Bloomberg) -- Ghanaian Finance Minister Ken Ofori-Atta survived a censure motion to remove him from office after ruling-party lawmakers walked out before the vote.

Minority lawmakers voted in favor of Ofori-Atta’s removal in a secret ballot Thursday, but the censure motion required two-thirds of lawmakers in 275-seat chamber to support the motion for it to succeed.

The vote in favor of the censure motion garnered 136 ballots, Speaker Alban Bagbin said in parliament, falling short of the minimum required. “The vote is accordingly lost,” he said.

The opposition National Democratic Congress brought the motion against Ofori-Atta over an alleged conflict of interest and unconstitutional withdrawals from the government’s so-called Consolidated Fund. Members of the ruling New Patriotic Party, which hold the same number of seats as the NDC in parliament, had said they wouldn’t back the motion even though more than half of them also want Ofori-Atta to step down.

President Nana Akufo-Addo “has refused to reshuffle,” minority leader Haruna Iddrisu said after the result was announced. “We have sent a loud message to him that we have no confidence.”

Ofori-Atta has been under fire over his failure to deal with the West African nation’s economic crisis. Ghana’s currency plunged and yields on its eurobonds surged this year because of investor concerns about the sustainability of its debt. The decline in the cedi has pushed the annual inflation rate to more than 40%, sparking protests by traders and consumers, and the government is now seeking a $3 billion bailout from the International Monetary Fund.

The motion’s failure paves the way for Ofori-Atta to continue leading talks with the IMF, which has a mission in Ghana that seeks to conclude discussions with authorities with the goal of reaching an IMF staff-level agreement this month. The mission ends on Dec. 13.