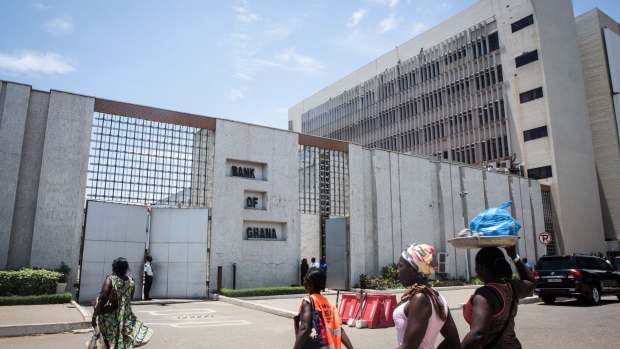 The Bank of Ghana stands in Accra, Ghana, on Monday, Sept. 21, 2018. Ghana’s central bank maintained its benchmark interest rate at a 4 1/2-year low for a second straight meeting as inflation reached the top end of its target band. , Bloomberg

(Bloomberg) -- Ghana is working to make a digital form of its currency available to offline users.

The e-cedi, which the Bank of Ghana is set to pilot, seeks to facilitate transactions without the need for power or connectivity, according to Kwame Oppong, who heads fintech and innovation at the regulator.

“Financial inclusion is limited by the availability of connectivity and power,” Oppong said at the Ghana Economic Forum Monday. “What we hope to be able to do - and we’re one of the people pioneering this - is that the e-cedi would also be capable of being used in an offline environment through some smart cards.”

About half of Ghana’s population had access to the internet as of 2019, and 84% had access to power, according to World Bank data.

Globally, more central banks are testing digital forms of their legal tender, allowing for faster and cheaper money transfers across borders, without losing control over their monetary systems.

The rapid growth of cryptocurrencies, which are distinct from digital currencies issued by central banks, is posing a potential threat to existing monetary regimes and adding urgency to debates on handling cross-border transfers.