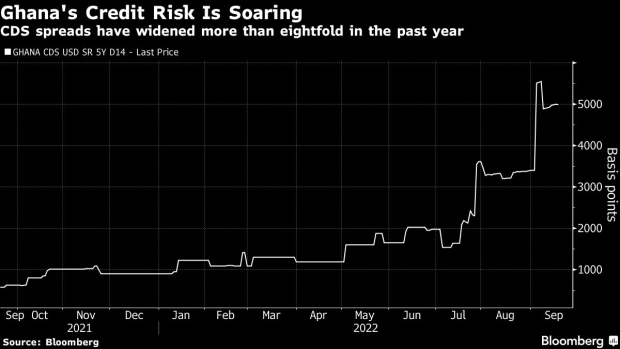 (Bloomberg) -- Ghana is poised to start talks with domestic bondholders on a restructuring of its local-currency debt as part of the West African nation’s plan to secure a $3 billion loan from the International Monetary Fund. The country’s eurobonds extended declines.

The nation’s largest debt investors including local banks and pension funds are preparing to engage in discussion on debt reorganization that could entail extension of maturities and haircuts on principal and interest payments, according to people familiar with the matter, who asked not to be identified because they are not authorized to speak publicly. The restructuring would be part of a debt-sustainability plan required by the International Monetary Fund, the people said, and will include part of the $19 billion Ghana has in outstanding local debt.

Ghana began engaging the IMF in July for a $3 billion, three-year extended credit facility program after efforts -- including cutting discretionary state spending by as much as 30% -- failed to stem a selloff in its eurobonds and halt a record depreciation of the cedi currency against the dollar. The African nation joins a number of emerging markets that are being forced to default or restructure some of their debts this year. Economies around the globe have been burdened by unwieldy food and fuel costs, which weigh unevenly on lower-income economies prone to protests and political chaos.

The country’s debt reorganization will initially focus on domestic bonds, though external liabilities could also be included depending on how much Ghana would have to reduce its debt-servicing costs to achieve fiscal sustainability, one of the people said. The exercise will focus on easing the country’s interest-payments burden, and whether that requires haircuts to principal, interest or both will be the subject of meetings between the government and bondholders in coming weeks, the people said.

“Given that interest on domestic debt accounts for around three-quarters of total interest cost, it is not unsurprising that some participation from holders of local debt is included in this debt restructuring plan,” said Mark Bohlund, a senior credit research analyst at REDD Intelligence.

The IMF has yet to conduct a “thorough update” of Ghana’s fiscal situation, the organization said, after an sustainability assessment last year concluded the country required  a “rigorous and credible” plan to “put debt on a declining trajectory and ensure continued market access.”

“In cases where a country’s debt is assessed as unsustainable, the IMF is precluded from providing financing, unless the member takes steps to restore debt sustainability, including by seeking a debt restructuring from its creditors,” an IMF spokesperson said in an emailed response to Bloomberg’s questions. Spokespersons for Ghana’s finance ministry and central bank did not immediately comment when contacted by phone.

Investors demand a premium of 2,190 basis points over US Treasuries to hold Ghana’s eurobonds, compared with an average of 878 for African issuers, effectively shutting the world’s second-biggest cocoa producer out of international capital markets. The cost of insuring Ghana’s debt against non-payment using credit-default swaps has soared to almost 5,000 basis points, from less than 1,000 in January.

The cedi has lost 39% of its value against the dollar this year, making it the second-worst performing currency in the world after the Sri Lankan rupee.

Ghana’s debt-service costs in the first half amounted to 20.5 billion cedis ($2 billion), equivalent to 68% of tax revenue, according to budget data. Government debt increased to 393.4 billion cedis, or 78.3% of gross domestic product, by end of June.