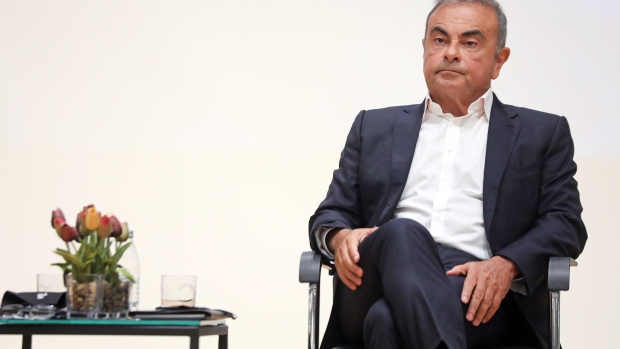 Carlos Ghosn, former Nissan chief executive officer, pauses during a news conference at the Holy Spirit University of Kaslik (USEK) in Jounieh, Lebanon, on Tuesday, Sept. 29, 2020. China has emerged as a crucial market for Japan’s second-biggest automaker by output as it struggles to recover from a boardroom scandal surrounding former chairman Carlos Ghosn and a sales slump that threatens its alliance with Renault SA. , Bloomberg

(Bloomberg) -- The two American men accused of orchestrating the former Nissan chairman Carlos Ghosn’s escape from Tokyo are making a last-ditch appeal to the Trump administration to avoid being sent to face trial in Japan.

After a federal magistrate in Boston authorized Japan’s extradition request in September, representatives for former Green Beret Michael Taylor and his son Peter wrote to officials in the White House and State Department urging them to reject Japan’s request.

It’s a long-shot strategy, but Michael Taylor is presenting himself to the U.S. government as a heroic patriot: He’s playing up his cloak-and-dagger past rescuing children abducted to the Middle East.

The final decision on whether to ship the Taylors to Japan rests with Secretary of State Mike Pompeo. For months, the Taylors have deployed an expensive team of lawyers and lobbyists to press their case with officials at the Justice Department and the State Department.

That lobbying intensified after the Sept. 4 ruling in Boston. About a week later, the Taylors’ team sent a roughly 25-page letter to an official at the State Department who oversees extraditions, laying out arguments that the father-son duo made in court, along with testimonials from the mothers whose children Michael Taylor helped rescue during his career as a security consultant, according to a person familiar with the matter.

The Taylors also sent an approximately two-page long, bullet-point summary to the White House, the person said, following conversations about the case with high-level officials in the Trump administration.

The White House did not comment on the Taylors’ submission. Lawyers for the Taylors did not respond to requests for comment.

A former member of an Army Special Forces unit, Michael Taylor, 59, ran a private security firm in Boston in the 1990s and 2000s and worked for the U.S. government in Iraq.

In 2012, he was indicted for his involvement in a Defense Department bid-rigging scandal and served time in prison after pleading guilty to wire fraud. In a sentencing memo in that case, Taylor’s lawyers quoted from a letter written by a woman named Kathy Paterson, who said Taylor helped secure the safe return of her young daughter after the girl’s father abducted her to Lebanon in 1993.

The chances that the Taylors’ lobbying efforts will succeed in swaying the U.S. government are vanishingly slim. Experts on extradition say the State Department rarely reverses course after a judge authorizes an extradition request from an American treaty partner.

Rejecting the extradition request would also strain relations with the Japanese government at a time when the U.S. has emphasized the importance of partnering with Japan to show a united front against China. Still, the Trump administration is nothing if not unpredictable, and the president has repeatedly shown a willingness to depart from standard practice in high-profile criminal cases.

The Taylors’ recent flurry of communication with the U.S. government marks the latest step in a wide-ranging political-influence campaign that began last May when the father and son were arrested on suspicion of sneaking Ghosn out of Japan while he was awaiting trial on charges of financial misconduct.

At the same time they fought extradition in federal court, the Taylors spent at least $130,000 on a team of seven lobbyists with the Washington law firm K&L Gates who have urged members of Congress and officials at the White House and State Department to intervene in the case, according to lobbying disclosure forms filed in July and people familiar with the lobbying.

Much of the Taylors’ early lobbying was aimed at securing bail while the federal magistrate in Boston evaluated Japan’s extradition request. That effort was unsuccessful: The Taylors failed three times to win bail.

The Taylors have never denied that they were involved in the escape. Indeed, Michael Taylor gave an extensive interview to Vanity Fair describing how he planned the operation. But they argued in court that their alleged offense didn’t actually break the law in Japan.

Last month, however, U.S. Magistrate Donald Cabell authorized the Japanese extradition request, ruling that it was not the role of an American court to parse the nuances of a foreign penal code. “The prevailing view is that the extradition court should defer to the foreign country’s interpretation of its own laws,” he said.