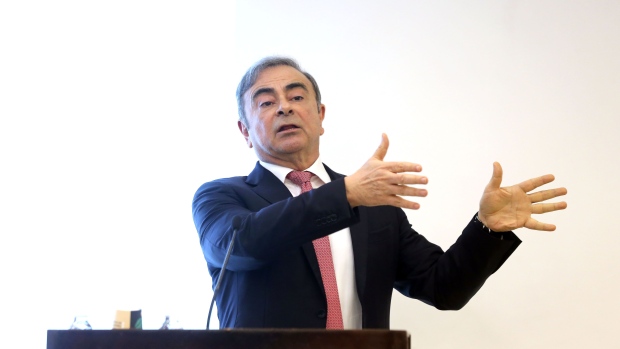 Carlos Ghosn, former chief executive officer of Nissan Motor Co. and Renault SA, gestures as he speaks to the media at the Lebanese Press Syndicate in Beirut, Lebanon, on Wednesday, Jan. 8, 2020. “Ripped from my family, my friends, my communities, from Renault, Nissan and Mitsubishi and the 450,000 women and men who comprise those companies. It is impossible to express the depth of that deprivation and my profound appreciation to once again be able to be reunited with my family and loved ones,” Ghosn said. , Bloomberg

Carlos Ghosn’s son made about US$500,000 in cryptocurrency payments to one of the two American men accused of helping the former Nissan Motor Co. chairman escape criminal charges in Japan, U.S. prosecutors said.

Anthony Ghosn made the payments to Peter Taylor via the cryptocurrency platform Coinbase after the auto executive escaped in a box smuggled aboard a private plane in December, prosecutors said in a court filing Wednesday. Together with an earlier wire transfer, Taylor and his father, ex-Green Beret Michael Taylor, received at least a combined US$1.36 million from the Ghosn family, government records show.

Carlos Ghosn, who fled to Lebanon, has claimed his family played no part in his escape from Japan, where he faced charges of financial misconduct. But prosecutors in the U.S. and Japan have gathered evidence indicating his son and one daughter, Maya, played some role in the operation.

The Taylors were arrested by U.S. authorities in May at the request of the Japanese government, which is seeking to extradite them. In its formal extradition request to the U.S. in June, Japan included security-camera images and a witness interview showing Maya Ghosn met with her father, and later with Peter Taylor, in Tokyo on the day of the escape. She arrived at Taylor’s hotel in a car carrying some of Ghosn’s luggage, prosecutors said.

No one in Ghosn’s family has been charged with aiding the escape. A spokeswoman for the family didn’t immediately respond an emailed request for comment Thursday.

The cryptocurrency transfers, made in installments from January through mid-May, are the second set of payments that prosecutors have identified between Ghosn and the Taylors. In the extradition request, Japanese investigators said that Ghosn himself had wired more than US$860,000 to a company run by Peter Taylor.

The Taylors, who have been in custody since their arrests in Massachusetts, are now on their third attempt to win bail, after separate judges rejected their previous pleas for release. U.S. prosecutors argued in the court filing on Wednesday that the payments from Ghosn’s family showed that the Taylors were “paid handsomely” and have the resources to flee the country.

Earlier this month, Ghosn told Al Arabiya TV that he was “helping everyone who helped me...helping them with my means,” the prosecutors said in the court filing.

Lawyers for the Taylors didn’t immediately respond to a request for comment.

The Taylors have never denied that they were involved in Ghosn’s escape. But in court, their lawyers have argued that Japan’s extradition request is baseless because it does not actually accuse the Taylors of a serious enough offense to warrant extradition.

They have also argued that the Taylors have strong ties to Massachusetts and do not constitute flight risks.

At a bail hearing in June, the lawyers said that both men voluntarily returned to the U.S. from Lebanon this spring, even after Japan issued arrest warrants. If the Taylors had wanted to circumvent the judicial process, the lawyers said, they could simply have stayed in Lebanon, which does not have an extradition agreement with Japan.

“There is no chance that these guys flee,” said Paul Kelly, a lawyer for the Taylors.