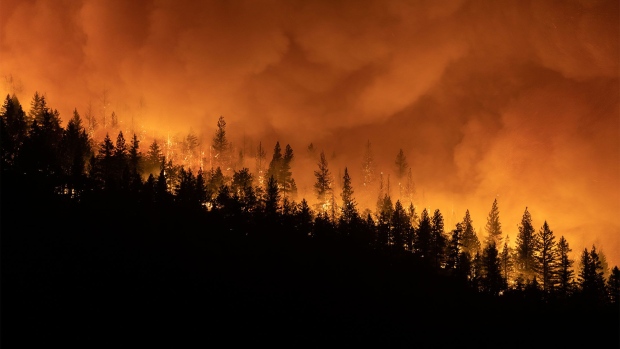 (Bloomberg) -- The Dixie Fire has been burning for nearly a month in Northern California, and that’s no longer unusual for giant wildfires torching the Golden State.

Eight of the 10 biggest fires in California history have occurred in just the past four years, and several of those raged for months before they were fully contained, according information from the California Department of Forestry and Fire Protection, or Cal Fire.

“The ability for these fires to grow right now is exponential,” said Daniel Bertucelli, a spokesman with Cal Fire’s incident management team for the Dixie Fire.

The August Complex fire, the biggest ever, blazed for nearly three months late last year in Northern California and destroyed more than 1 million acres before it was fully corralled.

The Dixie Fire has been tricky to contain because it’s located in a rural area with rough terrain and bone-dry vegetation, Bertucelli said. Fire officials don’t have an estimate for when the blaze, which has charred more than 500,000 acres and ranks as the second biggest ever in California, will be fully controlled. The fire was 30% contained as of Thursday afternoon.

“Once a fire gets as big as this fire is, it’s a big challenge,” Bertucelli said.