Beaufor mine has this great cadence for new discovery: Triple Flag CEO

Investors in the world’s biggest mining companies will this month be watching for signs that mounting cost pressures and the impacts of slowing Chinese growth could further erode record earnings.

Miners are likely to report a drop in profits. The top-five western diversified mining companies, including iron-ore giants Rio Tinto Group, Vale SA and BHP Group Ltd., may see combined 2021 second-half earnings of US$73 billion, according to analysts’ estimates, compared to US$82 billion in the first half.

Although elevated prices for metals mean profits remain robust on a historical basis, the dip is reflective of the headwinds that developed over the period.

“That’s going to be a theme: With the bumper profits that they’re enjoying, they are rewarding shareholders with dividends rather than ploughing it back into expansion,” said David Bassanese, chief economist at fund manager BetaShares in Sydney. “That shows that there’s not a lot of confidence” for the longer-term, with uncertainty about China at the forefront of concerns, he said.

Threats to economic growth in the world’s largest metals consumer are clouding the outlook for miners -- and especially iron-ore companies. 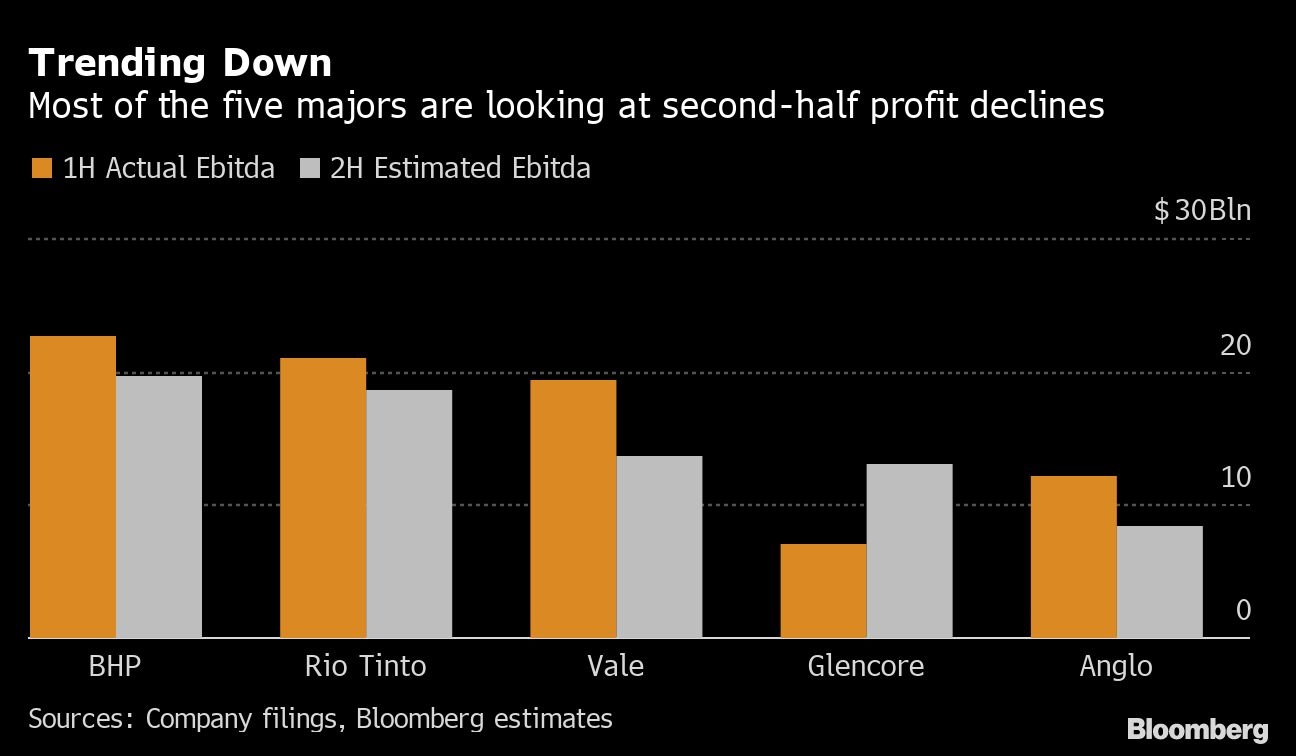 China’s property market, which consumes around a third of the country’s steel output, has been cooling -- Bloomberg Intelligence expects new home starts to decline by 5 per cent this year. And Beijing’s bid to cling to its COVID-zero status, even as regional outbreaks become more frequent, is the X factor that’s likely giving some resource executives sleepless nights.

The pandemic has been a double-edged sword for the mining sector over the six months to Dec. 31. On the positive side of the ledger, the trillions of dollars in stimulus packages ignited demand for commodities like iron ore, copper and aluminum, driving prices sharply higher and sending inflation pressures rippling through the global economy.

On the negative: rising operating costs are set to be a feature of the latest set of reports. Labor shortages are becoming an increasing challenge to ore producers in the Pilbara region of Western Australia, a state which remains subject to strict borders controls to keep the COVID-19 out. Supply chain bottlenecks have also seen global shipping rates ratchet higher.

“While commodity prices remain at or close to record highs, and the underlying performances of companies are generally robust, rising costs related to inflationary pressures are eating into operating margins at an even faster rate,” said Gavin Wendt, founding director at the consultancy MineLife Pty. That’s “leading to disappointment in the minds of some investors,” he said.

BHP and Rio have said that a lack of workers in key roles are having an impact on their operations. Fortescue Metals Group Ltd., the world’s No. 4 ore producer, reported last month that its costs had risen 20 per cent over the past 12 months driven primarily by rising fuel prices and labor shortages.

Vale is expected to have offset volatile ore prices by selling down its stockpiles and getting some cost relief last quarter. Still, the market will be wary of the potential for increased provisions for remedial action following the Samarco dam disaster.

The Brazilian company is still trying to get its base metals division back on track after a strike and an incident with workers trapped in a mine in Canada. That affected nickel and copper production in the third quarter.

All up, iron-ore miners had a bumpy ride in the second half of 2021. Prices collapsed from peaks north of US$230 per ton in May to the mid-US$80s in November after China tightened curbs on steel production to meet stricter environmental standards. They have since rallied afresh on expectations for a rebound in steel output after Beijing relaxed climate targets, yet price volatility remains a risk for the earnings outlook.

Glencore Plc has limited iron ore exposure and missed out on the excess riches enjoyed by its rivals in the first half. That trend is set to reverse in the second half, with the Swiss-based group benefiting from surging prices for coal -- a commodity it has stuck with even as the likes of Rio and BHP look to sell out. The Swiss-headquartered company is the only one of the big five expected to report a rise in underlying earnings for the period.

Meanwhile at Anglo American Plc, Chief Executive Officer Mark Cutifani will preside over his last earnings report after almost nine years at the helm. Investors will also be keen for an update from the company on its plans to develop the Woodsmith potash mine in northern England.

The earnings season will also see close scrutiny on what the big miners are doing to tackle deep-rooted cultural issues highlighted in Rio’s report into workplace culture earlier this month. Chief Executive Officer Jakob Stausholm said he was shamed by the report, which pointed to endemic sexism, racism and bullying across its operations.