Gilead Sciences Inc., whose COVID-19 treatment has whipsawed markets amid conflicting early reports about its efficacy, is set to report the first results from a company-sponsored study of the experimental drug.

Data from the first 400 severely ill coronavirus patients being treated with remdesivir in an open-label study are expected before the end of next week. While not expected to provide a definitive answer on efficacy, the report is likely to again trigger wide swings in Gilead’s shares and the broader market. Options prices show investors expect a more than 9% move in the drugmaker’s stock price over the next week.

Leaked results from a study out of China sent Gilead shares and the S&P 500 Index spinning lower on Thursday as investors pin their hopes on a treatment or vaccine. A week ago, the drugmaker’s stock rose the most since November 2012, bringing the U.S. benchmark higher with it, after data from one of Gilead’s testing sites was leaked to Stat, a medical news site.

The potential for an effective coronavirus medication has become key for investors trying to assess the extent of the pandemic’s damage to the economy, with shutdowns bringing activity to a near standstill in many places. A drug cure or treatment is now the most important swing factor for investor sentiment, according to Evercore ISI strategist Dennis DeBusschere.

“The only thing that matters for the market is confidence about how the reopen works,” DeBusschere said by phone on Friday. “The better the treatments go, the higher the confidence, and vice versa. The Fed and fiscal stimulus are secondary.”

The data due for release next week won’t offer the same scientific rigor or assurances that come from studies where a treatment and a placebo are given to patients at random and doctors are blinded to which one patients are getting. The National Institute of Allergy and Infectious Diseases is running its own placebo-controlled and blinded study of remdesivir. Those results are expected to come in May and are likely to give a more definitive answer on the treatment’s effectiveness.

The first part of the company-sponsored study is targeting patients who have not been mechanically ventilated. Research suggests more than two-thirds of patients who are put onto the breathing machines die before being taken off them.

Investors should look for remdesivir to show that roughly only 10 per cent of the patients in the study die, while about half see “meaningful clinical/oxygenation improvements over two weeks,” and a three-fold decrease in their viral loads after about a week, according to RBC analyst Brian Abrahams. Clinicians would also want to see “signals of dose dependence to suggest potential activity” for remdesivir. The makeup of the patient population will also have to be considered as a patient’s risk factors are known to have some influence on how they will do, he said. 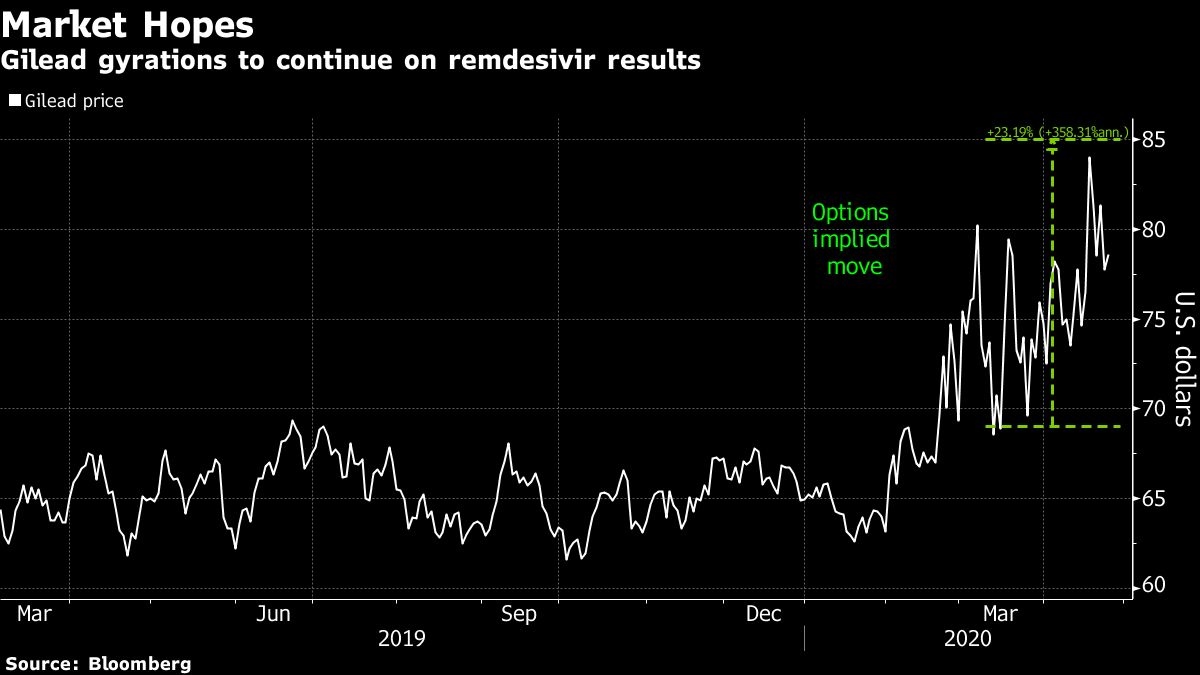 Citi’s Mohit Bansal expects the trial may provide insight into the length of treatment required. If remdesivir appears to work after only five days instead of 10, “that could potentially double the treatment capacity,” Bansal said. Gilead’s manufacturing capacity has been a concern as the drug is difficult to produce.

Both RBC and Citi have said remdesivir has a 50/50 shot at succeeding. Shares could trade back to their pre-pandemic level of US$70 or below while success could add as much as US$26 to current trading.

Remdesivir “is not a silver bullet; but it’s also not a zero,” Evercore ISI health care analyst Umer Raffat said in an April 17 note. The Gilead-run trial is likely to show interesting trends that would be “hard to interpret” without a comparator arm, Raffat said.

University of California, Riverside virologist Juliet Morrison expressed a similar sentiment. “We still don’t have the raw data, but it doesn’t seem impressive to me,” she said in a phone interview after the China data reports. For diseases like COVID-19 driven by a patient’s own immune system, “antivirals are unlikely to work. And they won’t be helpful at the severe stages of the disease when the virus is not the driving factor,” she said.

With so much information coming from so many different smaller studies, “some of the studies are being changed halfway,” Morrison said. Gilead has changed some trial parameters more than once.

“I wish I could be more positive. I want this to work but I also don’t want us just going barking up the wrong tree because we’re just desperate for a cure,” Morrison said.

The lead investigator for a remdesivir study site in South Carolina also weighed in on early anecdotal reports of remdesivir’s effectiveness without placebo comparisons. “It’s like giving a rock to someone and telling them it will keep tigers away. If they don’t see any tigers, it isn’t necessarily because of the rock,” he said in a statement.