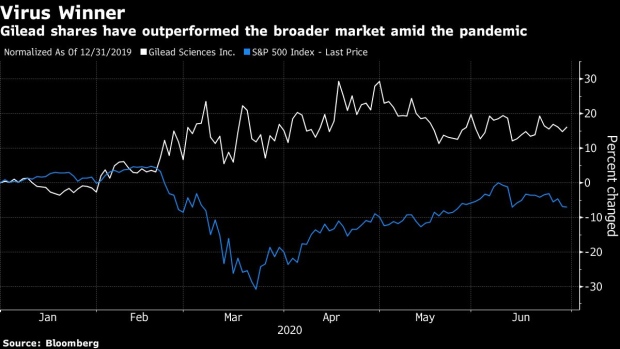 (Bloomberg) -- Gilead Sciences Inc.’s move to charge less than expected for its coronavirus-fighting drug drew a debate on Wall Street, as analysts sparred over the company’s ability to recoup its more than $1-billion investment in developing and making the medicine.

The drug developer announced that commercial patients would pay roughly $3,120 for a five-day course of remdesivir, while those on government-led care programs like Medicare would pay about $2,340. That’s well below some estimates that a five-day course could cost as much as $5,000, and compares to Gilead’s analysis that the drug could save $12,000 per patient by helping them get out of the hospital quicker.

SunTrust’s Robyn Karnauskas wrote in a research note that it’s “unclear how Gilead will recoup their investment” in the near-term as the drugmaker spends more than $1 billion in developing and making remdesivir through the end of the year. With the cost of goods sold unknown and variability in how many patients will be treated in the second half of the year, Karnauskas’s base case reduces Gilead’s stock value by about $3 a share.

RBC Capital Markets analyst Brian Abrahams saw the pricing through a different lens and argued it could imply revenue of about $2.3 billion this year, more than offsetting Gilead’s spending. That additional $1.3 billion of profit would translate to $1 a share in valuation and add about $1 to earnings per share for 2020, he wrote.

Here’s more of what analysts had to say on the drug’s pricing news:

Spending more than $1 billion on developing and manufacturing remdesivir through year-end, it’s unclear how Gilead will recoup its investment in the near-term.

Highlighted that “Gilead has decided to price below value to ensure access and global need and remove the country-by-country negotiation.”

“In the U.S., while new cases are rising, they are not resulting in hospitalization at rates seen in the first half. Gilead already has established generic partners to lower cost to developing countries and continues to be focused on increasing supply and access.”

“We believe this is generally in line with expectations, though below the original ICER estimate of $4,500 and some recent more bullish estimates; Gilead also appears to have done a more careful job articulating the rationale for pricing than in the past with HCV.”

“Longer term, however, we believe the fundamental value creation opportunity for remdesivir in the out years remains limited, given the likelihood of ultimate development of a vaccine (or herd immunity), the likelihood other therapies will produce similar or greater benefits perhaps with more convenient administration, and Gilead’s large existing ~$20 billion a year revenue base.”

“The pricing announcement is slightly below our expectation on the U.S. commercial price, but may indicate higher price for national stockpiling.”

“We believe the disclosed remdesivir pricing is reasonable, and should provide significant value to the Gilead shareholders and still deflect much of the criticism the company might face in this emergency.”

“At this price we expect routine adoption of remdesivir for almost all moderate to severe Covid patients in the U.S.” The price sets a benchmark for all other treatments and vaccines in development for Covid-19, which shows profit is possible though it may not be as large as some had hoped.

“While we don’t pretend to be pricing experts, this range seems reasonable considering that the value of early discharge is $12,000 per the U.S. government (which could be increased based on the average four-day shortening of stay) and that Gilead is spending $1 billion on manufacturing by year-end.”

“Additionally, we view pricing to be in-line with ICER’s prior assessment based on a mortality benefit. While statistics on mortality has not been achieved yet, there have been trends observed and ultimately, we’d argue that there is clear precedent for drugs with mortality benefits to command prices that are many multiples higher than what Gilead is charging.”

Pricing per patient is “well in-line if not below the value pricing they could have charged based on $12,000 of hospital savings for early discharge.” The sales potential, given pricing, provides between $1 billion and $2 billion of cash flow for the next few years.

Wouldn’t be surprised if Gilead guided for remdesivir sales of about $1 billion in an effort to be conservative, though investors are likely pricing in closer to $1 billion to $2 billion.