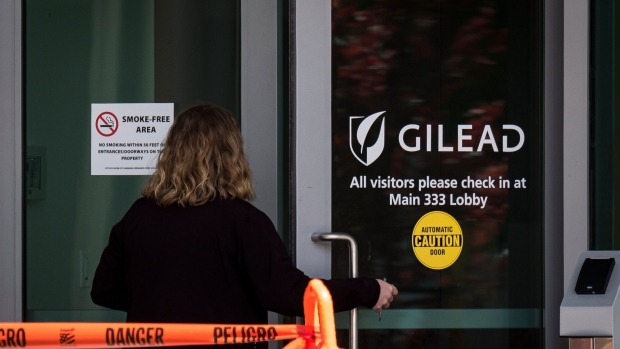 A person enters a building at Gilead Sciences Inc. headquarters in Foster City, California, U.S., on Thursday, March 19, 2020. Gilead Sciences stock jumped as much as 7% on Thursday, reaching a two-year high, as a Piper Sandler analyst doubled down on his call on the approval prospects for the biotech company's experimental therapy for the pandemic now sweeping the U.S. Photographer: David Paul Morris/Bloomberg , Bloomberg

Gilead Sciences Inc. said it will charge the U.S. government and other developed countries US$390 per vial for its coronavirus-fighting drug remdesivir, or about US$2,340 for a typical five-day course of treatment.

Gilead said in a statement Monday it would offer this price to developed countries around the world, in order to create a one-price model that would avoid the need for country-by-country negotiations that could slow down access.

“We wanted to make sure that nothing gets in the way of remdesivir getting to patients,” Gilead Chief Executive Officer Daniel O’Day said in an interview. The price “will make sure all patients around the world have access to this medicine.”

The US$390 per vial price is for government entities. Once supply is less tight and Gilead starts selling the drug in normal distribution channels, the list price for private insurance companies and other commercial payers in the U.S. will be US$520 a vial, or US$3,120 for a five-day course.

Remdesivir is one of the first widely used drugs for COVID-19. It received an emergency use authorization from U.S. regulators in May, after a big trial found the medicine sped recovery by about four days in hospitalized patients. Hundreds of treatments and vaccines are in development around the globe as researchers race to find ways to halt a global pandemic that’s infected over 10 million people and killed more than 500,000.

Gilead had promised to donate its supply of the drug through June, but what the company would charge after the donation runs out has been furiously debated. The drugmaker’s pricing decision is consequential because it sets a precedent for how much future medicines for COVID-19 may cost.

The company suggested that it could have charged more based on the value the medicine provides, the typical approach drugmakers use in setting pricing for new and innovative therapies. It argued remdesivir could save US$12,000 per patient by getting people out of the hospital faster. But it went with a lower price in order to make sure that all developed countries could afford it.

Shares of the Foster City, California-based drugmaker gained 1.6 per cent to US$75.75 in premarket trading Monday in New York. Through Friday, Gilead shares had gained 15 per cent so far this year.

Gilead also said Monday it reached agreement with the Department of Health and Human Services to manage the allocation of remdesivir in the U.S. through September.

The coronavirus crisis in the U.S. is escalating as new cases of infection reach records. States such as Texas, Arizona and Florida are becoming overwhelmed and plans to re-open their economies are being reversed.

Some estimates have found that remdesivir would be cost effective at as much as US$4,500 for a treatment course. Other advocates, including consumer-rights group Public Citizen, have said the drug should just cost US$1 a day based on calculations that it could be manufactured at scale by generic drugmakers for this amount.

In the interview, O’Day said US$1 per day was “not a realistic price point.”

Six vials of remdesivir are used during a five-day treatment. But a minority of patients need 10 days of treatment, or 11 vials, which would bring the total cost up to US$4,290.

O’Day said pricing of the drug was a balancing act. On the one hand, a pandemic is raging and there is no cure. On the other hand, the company is a for-profit entity that has made enormous investment into manufacturing large quantities of the medicine quickly as well as developing new, easier-to-administer versions.