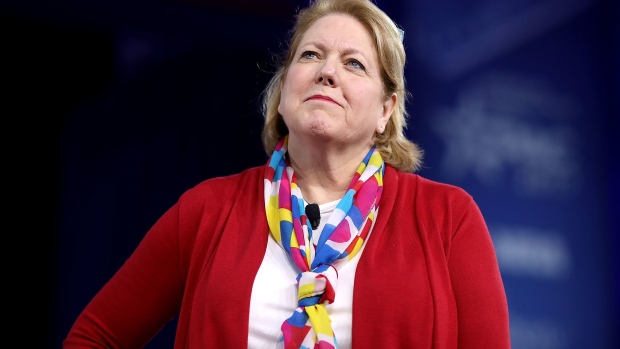 (Bloomberg) -- Virginia “Ginni” Thomas, a conservative activist and the wife of Supreme Court Justice Clarence Thomas, reiterated Thursday to the House panel investigating last year’s assault on the US Capitol her belief there was “something wrong” with the 2020 election results.

Thomas’s lawyer, Mark Paoletta, said in a statement that she had focused after the election on ensuring that questions about the election were investigated.

“As she has said from the outset, Mrs. Thomas had significant concerns about fraud and irregularities in the 2020 election,” he said in the statement. He added that she had answered all the panel’s questions.

The committee had been seeking since June to interview her about communications with allies of then-President Donald Trump and advocacy of efforts to undo Joe Biden’s 2020 presidential election victory.

Committee members declined to describe much of what they heard Thursday, in about four hours of questioning.

But Thompson said that “The information was typical of a lot of information we received from other people who were involved this effort around Jan. 6 -- a lot of, ‘well I believe something was wrong, that’s why.’”

“That’s not illegal. It’s one’s opinion,” he said, but she had nothing to back it up. “She is a witness. We didn’t accuse her of anything.”

Thompson said she didn’t decline to answer any questions while he was in the room, or reveal discussions with her husband about the election.

Asked if he believed Justice Thomas should recuse himself from any potential Jan. 6 or related matter, the chairman said  -- “I think members of the Supreme Court ought to be held to the same ethical standards that other judges are held to.”

It’s an ethical decision, he said, but added he believed, “It’s up to the judge.”

Thompson declined to discuss any information that was provided about Thomas’s emails and communications with John Eastman, a lawyer advising Trump, reflecting her advocacy for the campaign to prevent Biden from taking office. He also would not discuss anything about her text messaging with Trump’s last White House chief of staff, Mark Meadows, expressing concerns about the 2020 results.

“We’ll just share that information later” he said. No decision has been made on whether footage of her interview might be shown publicly during a hearing.

Paoletta, in his statement, did make a point of saying in that one of her texts to Meadows, “she also condemned the violence on Jan. 6, as she abhors violence on any side of the aisle.”

The interview occurred at the Thomas P. O’Neill Jr. House office building near the Capitol that has been the base of operations for the committee and its staff, including most of its witness interviews.

Thompson said the committee has not rescheduled a public hearing that had been set for Wednesday but was abruptly postponed. Committee members did not want to proceed with the hearing without colleague Representative Stephanie Murphy of Florida, whose district was in the path of Hurricane Ian.