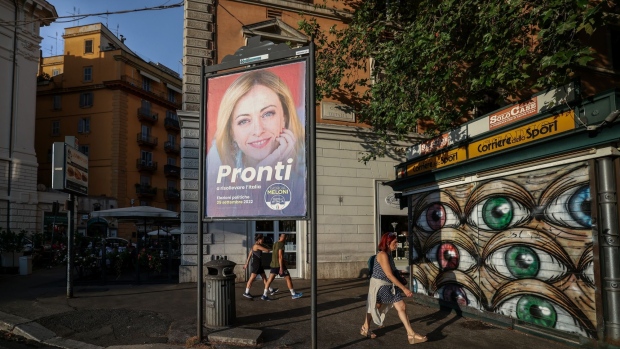 (Bloomberg) -- Giorgia Meloni’s electric performances at political rallies have made her a virtual shoo-in to become Italy’s first female prime minister. She’ll also be the first to campaign with the flame symbol, evoking the former fascist leader, Benito Mussolini.

The prospect of a charismatic nationalist taking power with almost no government experience has investors and officials on edge. Italy, of course, is wrestling with the fallout from the most serious conflict in Europe since World War II. But the country has been adrift for years, struggling to hit on a formula which can unlock its potential while still staying true to its identity.

There’s something about 45-year-old Meloni that simply resonates with voters.

See her on stage and you can understand it: She’s charming, she’s determined, and she’s very, very Italian. But for the officials and investors across Europe watching nervously as she closes in on victory in Sunday’s election, there’s one basic question still to be answered: who is Giorgia Meloni?

The first thing to remember is that Meloni is a product of the Italian system, and specifically, of its habit of occasionally sidelining its elected governments. She founded her party in 2012 to avoid supporting Mario Monti’s technocratic administration and rose to prominence as leader of the opposition to Mario Draghi’s last year.

Meloni fundamentally sees herself as an outsider, fighting against the system on behalf of the regular people. She’s also been an admirer Hungarian Prime Minister Viktor Orban and his conservative approach to the LGBTQ community and abortion rights, as well as his opposition to intervention from the European Union. “The party for Europe is over,” she shouted at a rally in Milan on Sept. 11.

For all her radical credentials, people close to Meloni say she is determined to show that she can manage Italy’s mammoth debt load and keep investors onside. She has no plan to increase the budget deficit to fund her policy plans, they say.

Markets are not convinced she will manage. “Perhaps notions of European solidarity in the face of a common enemy are insulating Italy,” said Rabobank strategists including Richard McGuire. “However, we find it hard to conceive of a scenario where Italian bonds do not come under pressure.”

A senior German official who asked not to be named observed that the yield on Italy’s 10-year bonds has already climbed to over 4% from less than 1% in December. “And she hasn’t even done anything yet,” they added.

Read More: Guide to What Italy Election Will Mean for Financial Markets

Meloni is well aware of the jeopardy she would face as prime minister, her aides say, and since Mario Draghi’s government was toppled in July, something about her has changed. She’s more thoughtful, focused and there’s a note of apprehension about her.

Italy’s recent history is full of politicians who shone brightly and then flamed out. Matteo Renzi, Beppe Grillo and Matteo Salvini all promised to transform Italy and then fell away as quickly as they emerged. Meloni has been thinking about how to avoid that fate.

For years, she dedicated hours each day to cultivating contacts in academia, national security, finance, business, diplomacy and, of course, politics in short 10-minute phone calls. She doesn’t plan to pick a government from among her longstanding associates, according to people familiar with her plans.

As the election draws near, she’s been deepening her relationship with Draghi himself, speaking to the former European Central Bank president weekly to discuss a potential transition.

Italy faces a treacherous winter crisis with energy shortages caused by the war in Ukraine sending inflation racing out of control, straining public finances and leaving many families and businesses asking if they’ll be able to afford to keep the heating on this winter.

After also backing the outgoing prime minister’s plans to send weapons to Ukraine, that’s added to the confusion over where she really stands.

“I have been accused of following the Draghi line and I have been called a fascist,” she said during an election debate this month. “How can you be both at the same time?”

To interpret Meloni’s shifting alliances and policy positions, you also need to understand what hasn’t changed.

Meloni has been involved in far-right politics for 30 years, since she walked into the local branch of Movimento Sociale Italiano in Rome as a 15-year-old.

She’d moved to the working class neighborhood of Garbatella in the South of Rome’s downtown with her mother after her father left the family and moved to Spain.

Nowadays it’s an up-and-coming area dotted with trendy shops and bars. But when Meloni moved in with her mother and sister in the 1980s it was a rough place, where people spoke with thick Roman accents and were quick to joke and to laugh at themselves.

It’s a little too easy to draw a line from the fatherless girl to the patriarchal party apparatus. In fact, she found MSI almost by chance.

Meloni was prompted to get involved in politics after the the Mafia assassinations of two Sicilian prosecutors in 1992. She’d heard of MSI and the party’s offices on Via Guendalina Borghese were close to her apartment.

But her associates say that Meloni found a family among the MSI who were a decade or so older. They shared a passion for god, family and the homeland. But, more than that, they hung out, they had fun, they stuck by her.

Though the political labels have changed over the decades, the group has remained fairly constant. Most of the advisers working with Meloni now were part of that world. Her sister and her brother-in-law are also members.

And the leader still jots down notes on scraps of paper she keeps in her pockets, just like she did when she set out in politics as a young girl. But now Meloni is in charge.

Meloni takes all the key decisions and issues clear instructions through the chain of command, her aides said. That’s enabled her to craft a carefully calibrated set of positions.

The heart of her appeal to traditional voters is about values.

In an echo of Donald Trump’s rhetoric, Meloni wants to put Italians first. She also wants to limit immigration and abortion and impose restrictions on the LGBTQ community.

But her commitment to protect Italian companies from foreign takeovers has become a mainstream position since Trump’s election victory. Draghi himself beefed up Italy’s powers to ward off unwanted foreign investors and Meloni backed Draghi’s call for a price cap on gas prices.

Russia has been her biggest shift. In 2018 she welcomed Putin’s re-election. In 2016, she criticized sanctions against Russia after the annexation of Crimea.

But February’s invasion of Ukraine transformed her view of Putin and saw her switch to the pro-NATO camp. She was genuinely upset by the evidence of abuses perpetrated by the Russians, aides say.

Read More: Italy’s Divided Loyalties Are Being Exposed by War in Ukraine

For those who still say she hasn’t been clear enough about who she really is and sort of government she would lead, the candidate herself has an emphatic answer, that has echoed out in rally after rally.