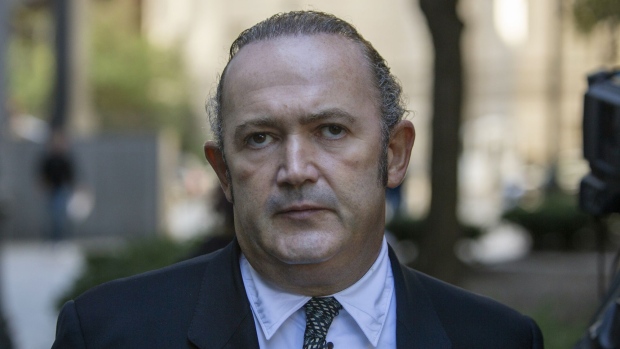 Igor Fruman, an associate of U.S. President Donald Trump's personal lawyer Rudy Giuliani, exits federal court in New York, U.S., on Wednesday, Oct. 23, 2019. Two associates of Giuliani pleaded not guilty to charges that they conspired to launder foreign campaign contributions into U.S. elections, in a case that has heightened scrutiny of Giuliani's foreign business ties and his work as personal lawyer to President Donald Trump. , Bloomberg

(Bloomberg) -- Igor Fruman, a key figure in Rudy Giuliani’s attempts to stir up dirt against Joe Biden before the 2020 presidential election, was sentenced to a year in prison for an unrelated case involving illegal U.S. campaign contributions from a foreign national.

Fruman, an American citizen who was born in Belarus and had businesses in Ukraine, was sentenced Friday in New York by U.S. District Judge Paul Oetken. He had pleaded guilty in September to the campaign-solicitation charge, and will serve the sentence after spending more than 27 months under house arrest.

Earlier, prosecutors dropped allegations that he was involved in a covert plan to secure information about Biden to curry favor with former President Donald Trump and advance Ukrainian interests in the U.S.

Fruman and his co-defendants, Lev Parnas and Andrey Kukushkin, had sought to win support from multiple U.S. states for a cannabis business they were trying to launch, according to prosecutors. The government said they used about $150,000 from a Russian investor in the pot business to make campaign contributions to state officials, mostly in Fruman’s name.

Parnas and Kukushkin were convicted by a jury in October of violating campaign laws.

As part of his plea deal, Fruman didn’t cooperate with prosecutors investigating the case. Though he could have faced a maximum of five years in prison on the charge he pleaded guilty to, prosecutors recommended a sentence of about three to four years. A fourth man in the case who pleaded guilty, David Correia, was sentenced to one year.

(Corrects spelling of Giuliani in headline.)