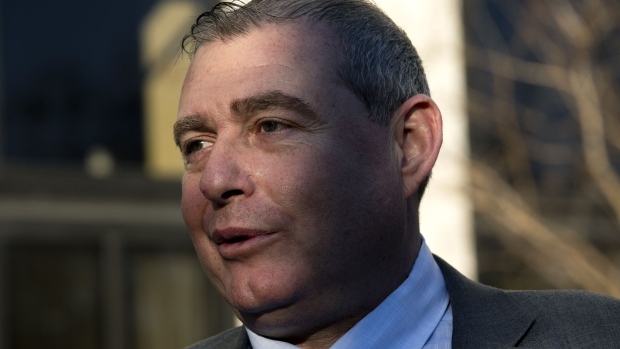 Lev Parnas, an associate of U.S. President Donald Trump's personal lawyer Rudy Giuliani, speaks to member of the media outside the U.S. Capitol in Washington, D.C., U.S., on Wednesday, Jan. 29, 2020. Parnas didn't go into the gallery to watch President Trump's impeachment trial because he can't get past security with his GPS ankle bracelet, said his lawyer Joseph Bondy. Parnas was indicted on campaign finance charges. , Bloomberg

(Bloomberg) -- Lev Parnas got in “over his head” with business ventures but didn’t knowingly break the law, his lawyer said in closing arguments in the Rudy Giuliani associate’s trial on campaign-finance violations.

Defense lawyer Joseph Bondy, pushed back on the government’s claim that Parnas and his co-defendant, Andrey Kukushkin, funneled $1 million from a Russian businessman into U.S. political campaigns to get political support for a planned cannabis business. Bondy portrayed his client as an essentially well-meaning businessman who knew little about laws governing donations to U.S. political candidates.

“Lev Parnas is a guy who doesn’t have any campaign finance experience or education,” Bondy told the jury on Thursday.

“They can’t get licenses under existing laws, so they need new laws,” Scotten said. “Who do they think can help them with that?”

Read more: Giuliani Associate Sees Trump-Linked Case Morphed at TrialThe trial’s focus differed sharply from what was alleged when Parnas and his partner Igor Fruman were first charged two years ago. Prosecutors at the time accused them of working to covertly advance Ukrainian government interests in the U.S. as part of former President Donald Trump’s effort to get political dirt out of Ukraine on Joe Biden.

Instead, the trial focused on political donations the group made to politicians in Florida, Nevada and elsewhere in the hopes of gaining support for a cannabis business they sought to launch, and that the donations were a way of raising their political profile. Fruman and another co-defendant pleaded guilty earlier, leaving only Parnas and Kukushkin to stand trial.

During the week-long trial, jurors heard testimony from political figures and campaign officials who received the funds as well as Federal Bureau of Investigation agents and Federal Election Commission officials who investigated the case. Key testimony came from Parnas’ onetime assistant, Deanna Van Rensburg, which was used to show that he was directing how some of the contributions were made. Prosecutors avoided raising anything related to the Ukraine matters that led to President Donald Trump’s first impeachment during the case, and there were no new revelations about Trump or Giuliani.