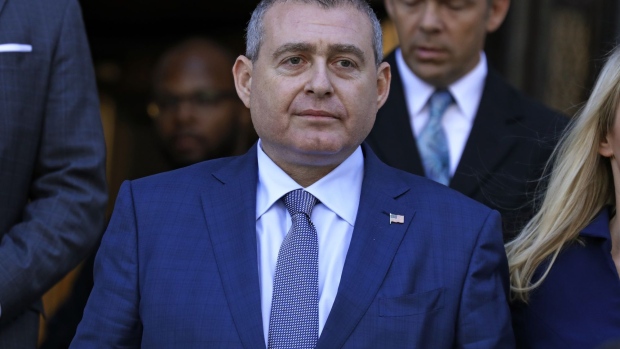 (Bloomberg) -- When Lev Parnas and Igor Fruman were arrested in 2019 boarding a plane with one-way tickets to Europe, prosecutors claimed the pair had made donations to American politicians to advance the interests of Ukrainian officials.

At the time, Parnas and Fruman were working with Rudy Giuliani to dig up dirt in Ukraine on then-candidate Joe Biden to aid the re-election campaign of President Donald Trump, who faced impeachment proceedings over his dealings in Ukraine.

But as Parnas’s trial kicks off in New York, the government’s case has almost nothing to do with Ukraine and instead focuses on political contributions allegedly intended to help launch a cannabis business. Allegations that Parnas -- once seen as a potential witness in Trump’s 2020 impeachment -- worked on behalf of Ukraine and sought removal of the U.S. ambassador have been quietly dropped. And at a hearing last week, prosecutor Hagan Scotten said Trump and Giuliani would be little more than peripheral figures.

“One reasonable theory is that the facts at the time allowed for some sensationalism around the charges,” said Ryan Fayhee, a former Justice Department national security prosecutor who is now a partner at Hughes Hubbard & Reed in Washington. But it also isn’t unusual for prosecutors to “streamline an indictment” to “focus on areas that are likely to ensure a fairly clean narrative,” Fayhee said.

During Trump’s first impeachment proceeding, evidence emerged that Yuriy Lutsenko, Ukraine’s former chief prosecutor, asked Parnas to seek the removal of the U.S. ambassador, Marie Yovanovitch, and that Parnas did so. Parnas and Fruman had refused to testify before Congress.

Read More: Here’s the Story on Impeachment, Trump and Ukraine

Prosecutors have never publicly explained why they removed the Ukraine allegations, saying only in a court filing last year that they were streamlining “certain factual allegations” in the case. A spokesman for the U.S. attorney’s office declined to elaborate.

Claims related to the pot business were always part of the case, but they are now taking center stage after prosecutors filed a new version of the charges in August.

Parnas and three others were accused of using funds from a Russian investor to make campaign donations to local politicians in several states. The men missed the deadline to apply for licenses and their pot venture never got off the ground. Foreign funds are prohibited in U.S. election campaigns.

Fruman and another defendant, David Correia, have already pleaded guilty.

Parnas and Andrey Kukushkin, a California businessman, are accused of a conspiracy to get $1 million from Russian investor Andrey Muraviev to use as political donations, according to court filings. Other charges involve laundering the true source of funds they used to donate $325,000 to a political action committee close to Trump, America First Action, and making false statements to the U.S. Federal Election Commission.

Prosecutors said they plan to show the jury photos of Parnas and Fruman with Giuliani and Trump, though that will mainly be to show they were trying to cultivate their image as influential businessmen with powerful connections.    One of the Nevada politicians who received the Russian-funded donations and who will appear as a prosecution witness is Adam Laxalt, the former Nevada attorney general and gubernatorial candidate who is now running for U.S. Senate. Laxalt was a co-chair of Trump’s re-election campaign in Nevada, and fanned Trump’s claims of voter fraud in the state in an effort to get the results overturned. Prosecutors have asked U.S. District Judge J. Paul Oetken to limit cross-examination of Laxalt on his political claims, which Parnas defense lawyer Joseph Bondy termed “untethered from reality.” In addition to Laxalt, officials from the America First Action committee and Congressman Pete Sessions’s campaign are also expected to testify. Another twist is that Kukushkin claims he was a victim of the foreign donation scheme by Parnas. Of the $1 million the men got from the Russian investor, prosecutors acknowledge that only about $100,000 was actually donated to politicians. The rest, according to Kukushkin, was taken by Parnas and Fruman. “It was all stolen,” Gerald Lefcourt, Kukushkin’s defense lawyer, said in court last week. “The whole thing is a fraud. There was never a conspiracy except to get money from Mr. Muraviev.” A jury was selected Tuesday, and opening statements begin Wednesday. Prosecutors said it will take less than two weeks to present their evidence.