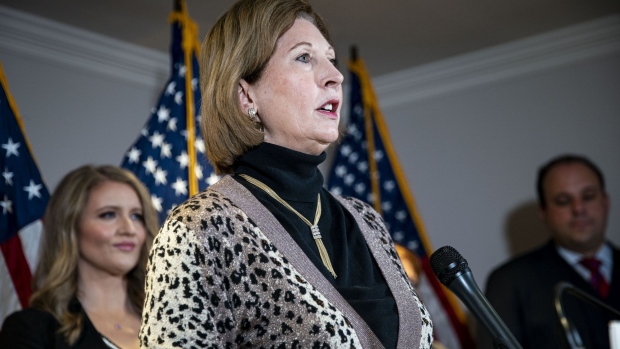 (Bloomberg) -- President Donald Trump’s campaign has disavowed attorney Sidney Powell, who as part of its post-election legal team has pushed some of the most extreme conspiracy theories around the vote.

The statement was released by the campaign on behalf of Trump lawyers Rudy Giuliani and Jenna Ellis, and was the latest twist for an evolving cast of advisers who’ve been waging Trump’s legal fight in the aftermath of the election.

“Sidney Powell is practicing law on her own,” Giuliani and Ellis said in their statement. “She is not a member of the Trump Legal Team. She is also not a lawyer for the president in his personal capacity.”

The unprecedented disavowal by Trump suggests that a high profile lawyer who was steeped in the president’s claims about a vast Democratic conspiracy against him had gone too far.

Giuliani, Ellis and Powell held a lengthy press conference Thursday at the offices of the Republican National Committee, in an event announced by the Trump campaign.

The three of them spoken at length, with Ellis calling them “an elite strike force team that is working on behalf of the president and the campaign.”

Trump himself has previously named Powell as a member of his legal team and praised the work of the lawyers.

Thursday’s press conference included a range of allegations, almost entirely unfounded. Some of the most aggressive ones came from Powell, who alleged a plot involving Venezuela -- and its former President Hugo Chavez, who died in 2013 -- to help swing the election for Biden.

Powell also said she was planning a massive case alleging fraud that would be “biblical” in scope in an interview on Newsmax on Saturday, where she was identified as a member of Trump’s legal team.