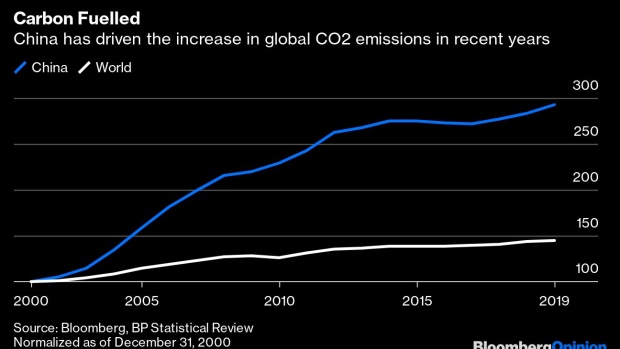 Bloomberg Best of the Year 2019: A man tends to vegetables in a field as emissions rise from nearby cooling towers of a coal-fired power station in Tongling, Anhui province, China, on Wednesday, Jan. 16, 2019. , Bloomberg

(Bloomberg Opinion) -- China’s ambitious pledge to decarbonize by 2060 requires the world’s top polluter to dramatically raise the cost of spewing greenhouse gases into the atmosphere. A long-awaited national carbon market that is finally set to begin trading this year will be less demanding and more limited than initially anticipated, if draft plans are a guide. It’s worth welcoming anyway.

Beijing could have done better. Support from the top, plus an unparalleled ability to push through change at scale, give the country a significant advantage. At the same time, China’s command-economy traits make it tough to apply a market-based solution, especially one that isn’t producing the right numbers elsewhere either. For one, power market reform is a work in progress. Moreover, China remains a developing economy on many measures, and its regions don’t always move at the same speed.

Carbon markets generally work by setting a limit, then allowing companies to trade allocated allowances. It encourages good practice, as those that cut back can sell their surplus; Others have to buy credits, and costs should rise with time. The plan in China is now years late. While initially designed to include major industrial sectors, it will be limited to power generation — less ambitious, even if coal-fired plants account for almost half of China’s carbon dioxide emissions from fossil-fuel combustion. It’s set to focus on carbon intensity. Allocations and opt-outs look generous,  according to a proposal seen last month.

In fact, the picture is a little more encouraging than that suggests. That’s not just because of existing experimental  markets that have been in place since the 2010s, or because of political pressure ratcheting up, though both will help.

At the most basic level, China is at least moving in the right direction. That’s some comfort, in a world that has abjectly failed so far to put an appropriately onerous price on negative externalities. Currently, the World Bank estimates only a fifth of emissions are covered by pricing initiatives, meaning the vast majority of the planet’s polluters pay nothing at all. And almost half of what is priced has a cost of less than $10 per metric ton of carbon dioxide equivalent — hardly enough to press anyone to act.

One key ingredient for accurate carbon prices is a tough and credible future limit, so that, once discounted back, they make sense today. With China’s pledge to hit a peak in 2030 and then carbon neutrality by 2060, that now exists. There is certainly a risk that the emissions market gets stuck in transit, lingering in this limited first stage. Yet the tough deadline set publicly by President Xi Jinping in September, along with signals sent since — plus China’s clear desire to take a global leadership role at a time when momentum is shifting — make that less likely.

China’s national carbon market, the world’s largest, has repeatedly fallen at various administrative, political and technical hurdles. If the aim was just to cut emissions fast, there would have been more effective policy tools — simply mandating closures and upgrades, say. It would have been beneficial to leave the portfolio in the hands of the powerful National Development and Reform Commission, and not the Ministry of Ecology and the Environment.

But, as Li Shuo of Greenpeace points out, that’s not the only measure of success. So far, an unprecedented data collection push has already forced companies to count emissions, the first step toward building a carbon cost into future planning. The availability and quality of data have improved, which in turn improves efficiency — as well as providing baselines for policy makers.

China’s pilot programs offer encouragement too, as the largest increase trading volume, dabble in innovation and explore allowance auctions, a source of future revenue to help cushion the cost of going green. That’s a welcome contribution, given estimates that put the cost of transitioning to carbon-neutrality within a few decades at $5.5 trillion.

It’s worth remembering that China has other ways to put a high price on carbon, as it shifts away from an energy mix dominated by fossil fuels, with a relatively young fleet of coal-fired power plants. A blanket carbon tax hasn’t been seen as palatable, for political and practical reasons. Yet as Lina Li, China ETS and climate policy expert at Berlin-based consultancy Adelphi explains, experience elsewhere suggests that could still be introduced as part of a hybrid system, in which large emitters are covered by trading, and smaller ones by a tax.

China needs to be pressed to aim high when it comes to carbon trading and pricing. Others will be encouraged to follow. For now, it just needs to get started.