A Canadian company with a decade-old $27-billion plan to build a railway that would ship energy products from Alberta to the Pacific Northwest has filed a lawsuit against a group of defendants, including Bridging Finance Inc., alleging that a rival project at the centre of the private lender’s high-profile scandal stole proprietary information.

The lawsuit is another chapter in the scandal at Bridging Finance, a Toronto-based private lender that was sent into receivership earlier this year amid an Ontario Securities Commission (OSC) investigation into alleged mismanagement and self-dealing. The OSC probe led an Ontario judge to put PricewaterhouseCoopers in control of Bridging, which managed approximately $2 billion in assets as of December 2020, according to a court filing.

OSC staff alleged that Sharpe received undisclosed payments into his personal chequing account from a company controlled by McCoshen at the same time that Bridging Finance loaned more than $100 million to companies operated by McCoshen, including the Alaska-Alberta Railway. The allegations haven’t been proven or tested.

Matt Vickers, chief executive officer of the G7G Railway project, said in a phone interview that he decided to file the lawsuit now because potential investors began to confuse his rail project with the competing Alaska-Alberta project. He also said he hopes for a friendly resolution because both projects included provisions that mandated significant First Nations ownership.

"I was always praying and trusting that the First Nations would put an end to the dispute between the two rail groups," he said.

The G7G Railway project was first envisioned in 2008 as a major infrastructure initiative that would link Alberta's oil patch to several ports in British Columbia, Alaska, and the Arctic to get some of the province's energy products to foreign markets. Under the plan, First Nations groups would own half of the project, and the total cost was estimated to be about $27 billion, Vickers said. The Alberta government provided G7G Railway with $1.8 million in April 2013 to develop a feasibility study.

The lawsuit alleges that executives from G7G Railway met with McCoshen to seek financing support in May 2015 and subsequently signed a non-disclosure agreement to keep details of the rail project confidential. Two months later, McCoshen and Falcetta are said to have introduced G7G Railway to Sharpe and the Bridging Finance team to provide financing for the project.

Vickers said he first met McCoshen after one of G7G Railway's directors met with Blaine Knott -- a former employee of The Usand Group, a Manitoba-based company that McCoshen founded that aimed to create partnerships with First Nation, Inuit, and Métis organizations and communities -- when seeking financing for the rail project. Knott wasn't immediately available for comment.

"I believe [Knott and the G7G director] were meeting for one of our wind projects at the time and it was mentioned that we're working on this massive rail project. Blaine [told the director], 'Well listen, I known this guy Sean McCoshen. He's an investment banker and he raised funding for First Nations for participating in equity positions and major projects,'" Vickers said.

"We go Googling to see who Sean McCoshen is and we certainly never found anything negative or positive about the guy so we thought, what the heck, if someone can raise the 50 per cent for First Nations investment, it's not going to hurt to go meet with them."

Vickers said that shortly afterward, he had dinner with McCoshen after a meeting earlier in the day with the G7G Railway board failed to secure a financing deal. Vickers said that McCoshen told him, "I know the First Nations are going to have to trust me. Do you trust me?"

"My answer to him was that I just met you. I later told the board, 'Wasn't that a ridiculous statement for him to make?’," Vickers said.

‘Give me a break’

Between July and December 2015, Bridging Finance agreed in principle to provide a $28.9-million loan to G7G Railway, signed a non-disclosure agreement, and was privy to confidential information regarding the rail project, the filing states.

According to the filing, Vickers spoke with Sharpe in July 2015 regarding the financing arrangement as well as a $1.4-million payment that McCoshen would receive for connecting G7G and Bridging Finance. The lawsuit alleges that Sharpe told Vickers that Bridging Finance would "push on" from discussing the lending plans with G7G Railway and cut off communication with the company.

"If that was the finder’s fee for a $27-billion project, you know, it probably would be understandable," Vickers said. "But for a $20-million loan? I mean, give me a break. Who would even think of paying that kind of money."

Around that same time, G7G Railway alleges that the defendants "combined or conspired with each other with the intent to injure the plaintiff by entering into an agreement to steal the plaintiff's idea for the G7G Railway, misappropriate the plaintiff's proprietary information and pursue an identical or nearly identical railway project along the route." 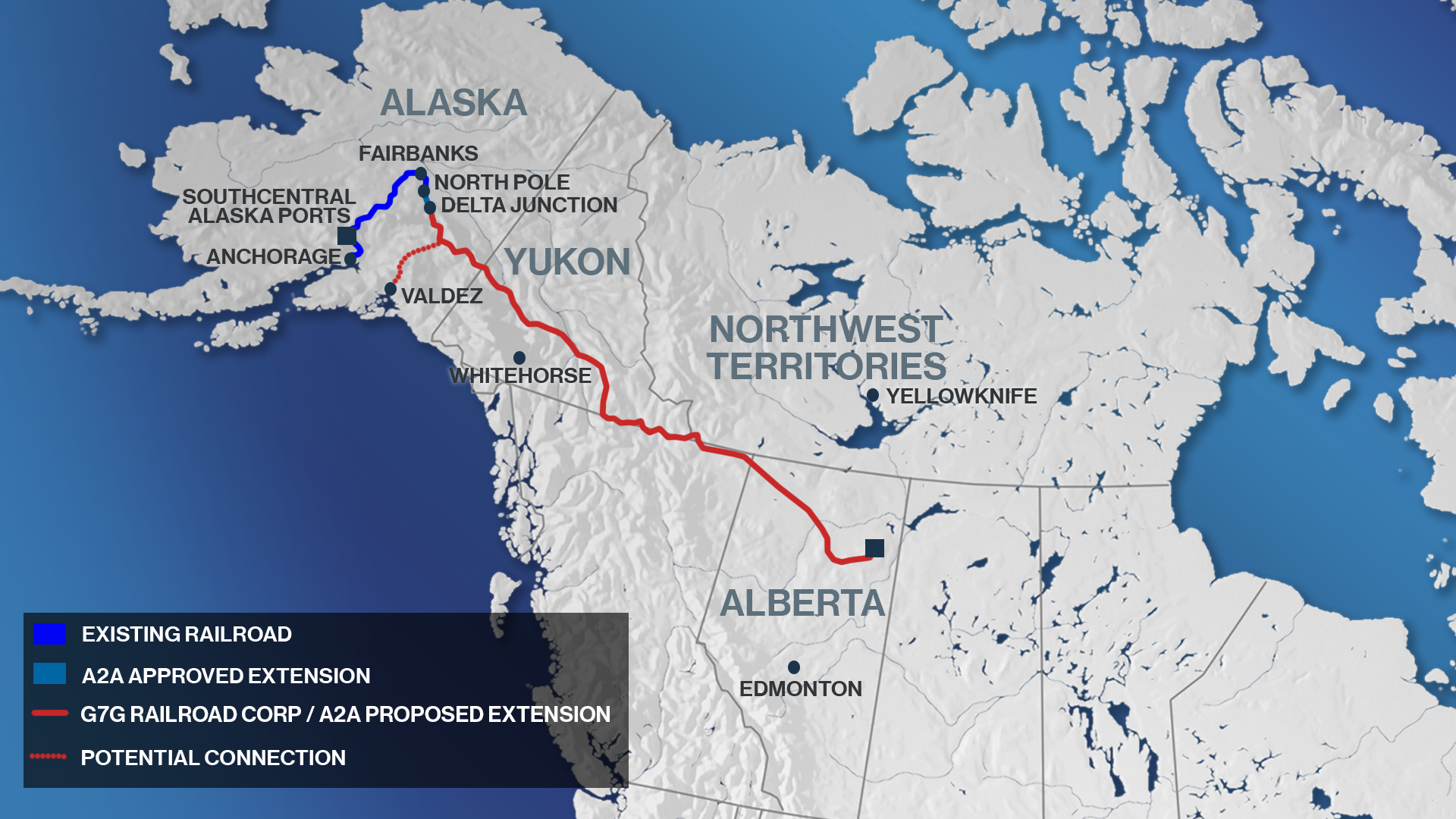 That idea is alleged to have led to the creation of Alaska-Alberta Railway Development Corp., which was founded by McCoshen. The competing rail project also hired Aecom to lead engineering development while Bridging Finance provided $180 million in loans to the company, the lawsuit alleges. Despite being granted a presidential permit from former U.S. President Donald Trump last September to develop the project, Alaska-Alberta Railway Development Corp. filed for bankruptcy protection in June shortly after Bridging Finance was put into receivership. Vickers said that G7G Railway is exploring legal advice on whether it would acquire its rival's assets during bankruptcy proceedings.

Lawyers representing the court-appointed receiver for Bridging Finance and Sharpe declined to comment. Representatives from Aecom Canada, Alaska-Alberta Railway Development Corp., as well as Falcetta were not immediately available for comment. McCoshen didn't respond to messages left on his personal cell phone and a phone number linked to a company he controls.

When reached, Hjelholt told BNN Bloomberg in an email that he was unaware of the lawsuit filed by G7G Railway and had not seen the statement of claim, so he could not comment on the details.

“I can categorically deny that I, nor to my knowledge AECOM (when I was employed there, ending in June of 2016) even HAD a contract with G7G. I am not a lawyer, but I am pretty sure you cannot breach a contract if you don't have a contract,” Hjelholt wrote in the email.

According to Vickers, G7G Railway has a signed agreement with Aecom from Nov. 14, 2011, but was not able to share it with BNN Bloomberg because the document is deemed confidential.

Vickers added that G7G Railway is still looking to develop the project and has secured a draft term sheet from an unnamed financier based out of Australia that would still preserve the First Nations equity position. He is also looking to secure Alberta Premier Jason Kenney's backing to go forward with the rail project.

A representative from the Alberta Premier's office said in an email that while the current government hasn’t provided any financial support for the project, discussions continue with counterparts in Alaska “on opportunities that are in the best economic interests of our two jurisdictions, which includes rail.”

"We feel it's economically viable," Vickers said. "The mining industry alone could generate a billion dollars in revenue. You've got frieght, you've got grain, the list goes on and on. Even if we ship no oil, the plan always was that we would be shipping raw bitumen in one form or another."