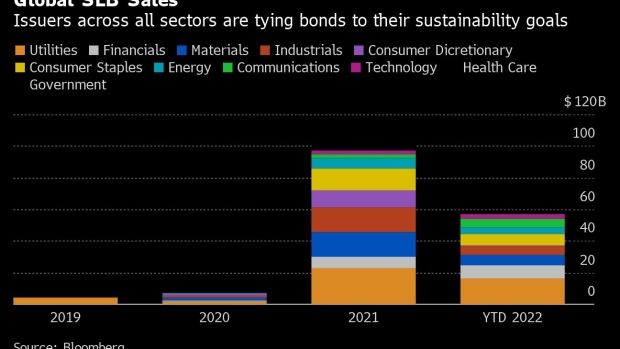 Pine trees in a forest in the village of Coatitila, Veracruz state, Mexico, on Wednesday, May 11, 2022. BP Plc has found a climate bargain in some of Mexico's poorest areas, paying a fraction of market rate for carbon offsets to rural villagers working to protect their forests. Photographer: Alejandro Cegarra/Bloomberg , Bloomberg

(Bloomberg) -- Borrowers in a part of the booming sustainable-debt markets have been offering to pay higher interest rates for falling short of climate or social goals. Now one country is proposing rewards for good performance too.

Uruguay published a sustainability-linked framework this week that includes a two-way pricing structure asking for discounts on its borrowing rate if the South American nation meets certain environmental achievements. These include areas such as a reduction in greenhouse gas emissions or maintenance of native forests. It will also pay a higher spread if the targets are not met.

The novel structure comes as global sales of so-called sustainability-linked bonds soared to more than $175 billion within three years of their inception, and after Chile became the first sovereign to issue such debt in March this year. While Chile’s deal only featured a penalty on its bond coupon if it fails to reach targets for greenhouse gas emissions and renewable energy generation, Uruguay would be the first sovereign to propose a reward for doing good.

Bloomberg News spoke with Anjuli Pandit, head of sustainable bonds for EMEA and the Americas at HSBC Holdings Plc about the rationale behind a two-way pricing adjustment for SLBs. HSBC is one of the top five underwriters for global ethical bonds this year, according to data compiled by Bloomberg.

This interview has been condensed and edited for clarity.

Why not only have step-ups like other conventional SLBs?

The take-up of sovereign SLBs will be tricky if there is only a step up as this is not an accessible structure for many emerging-market countries who are sensitive to interest-rate risk. If we want more disclosure from a sovereign, if we want more integration of ESG and debt, we need to be constructive in the feedback that we give as those deals come out. Also, the vast majority of investors we spoke to were very positive on step down and they intellectually and philosophically believe there should be a step down.

As emerging markets and sovereign investors start to integrate more ESG into their holdings, they are going to be looking at a group of sovereigns that they buy of which there’s a whole level of who’s missing and meeting their climate targets. Keeping in mind that if a country’s falling behind their climate targets, there’s probably other things going on in that country.

Why doesn’t the step-down structure work for some issuers?

When it came down to actually buying the product, a lot of credit portfolio managers had mandates where they could not buy bonds with a step down. They were just not allowed to buy the criteria, and that’s when we realized that it would actually hinder the performance of the bond if you had to step down because you’d have less demand from investors.

In the case of European sovereigns or developed market sovereigns, their coupon is quite small. There’s not much space to play with the up and down structure. The market also doesn’t want that fluctuation from developed market instruments that they use for liquidity pools.

And it works for emerging markets?

Because emerging market funds and rates funds don’t have those mandates, conditions that they can’t buy step-down products on them. There’s no technical reason why someone cannot buy it. Now maybe somebody chooses not to because they don’t want to hold the step-down risk, but that’s a different story.

What are the challenges for sovereign issuers?

There’s a lot of things that challenge sovereigns’ priorities, like governments could change, an economic crisis, Covid-19, etc. There’s even the conversation that we’ve been having on sustainability-link bond frameworks for sovereigns as to what if the territory of the sovereign changes? Also, for a country to provide the level of data and reporting required to even measure and set a target. And then to be able, despite whatever happens in those five years, to meet that target and then, even surpass it.

There’s less ESG risk in holding a sovereign in the medium term if they meet the targets they have set. The other thing that investors really like is the fact that the sovereign can pay the greenium later in the life of the bond.

Why the focus on climate goals and not other social ones?

Because it’s the most benchmarkable goal and it’s the key one for investors as most are focused on GHG emissions of their portfolio.

Also, GHG emissions targets are at the very top of what investors are interested in. I’m not saying that the other targets aren’t important, but climate targets will probably be the first place that a lot of sovereigns will look.