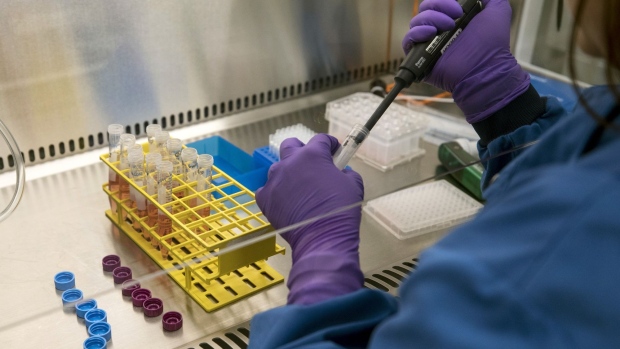 A scientist uses a pipette and plastic vials whilst working on stem cells inside a stem cell research laboratory at the GlaxoSmithkline Plc Research and Development center in Stevenage, U.K., on Tuesday, Nov. 26, 2019. Glaxo is exploring the trillions of microbes that inhabit the gut in pursuit of novel ways to prevent some of the world’s most common ailments. , Bloomberg

The partnership will combine Medicago’s plant-based production platform with Glaxo’s adjuvants, substances that enhance the body’s immune response, the companies said on Tuesday. Human testing is due to start in mid-July, and the companies aim to make the vaccine available in the first half of 2021, if it’s successful.

The U.K. drugmaker is contributing its adjuvant technology to multiple partnerships rather than developing its own vaccine candidate. The University of Oxford, working with AstraZeneca Plc, as well as Moderna Inc. and CanSino Biologics Inc. are among institutions and companies with programs already in human testing as governments look for a way to end the pandemic.

Medicago uses a virus-like particle grown in a close relative of the tobacco plant. Plant-based vaccines mimic viruses and allow the body’s immune system to recognize them and create an immune response, without being able to infect or replicate. Cigarette maker British American Tobacco Plc has been working on a plant-based vaccine via a biotech subsidiary, Kentucky BioProcessing.

Glaxo is betting the agreement could pay off in other ways, too.

“This plant-based technology also shows promise beyond Covid-19 and has the potential to help prevent other infectious diseases,” Thomas Breuer, the chief medical officer of Glaxo’s vaccines unit, said in the statement.

Glaxo has said its adjuvants could decrease the amount of vaccine each person needs for immunization, thereby extending supplies. One of its partners, Paris-based Sanofi, expects to start a study compressing the early and middle stages of clinical trials in September. Glaxo’s collaboration with Clover Biopharmaceuticals started tests in humans last month.

The British company said in May it plans to produce 1 billion doses of an adjuvant in 2021 to support the development of multiple Covid vaccine candidates.

Medicago is jointly owned by Mitsubishi Tanabe Pharma Corp. and Philip Morris. The tobacco company has signaled it’s willing to evaluate offers for its holding from groups that may be better suited to help Medicago in its next phase, the statement said.