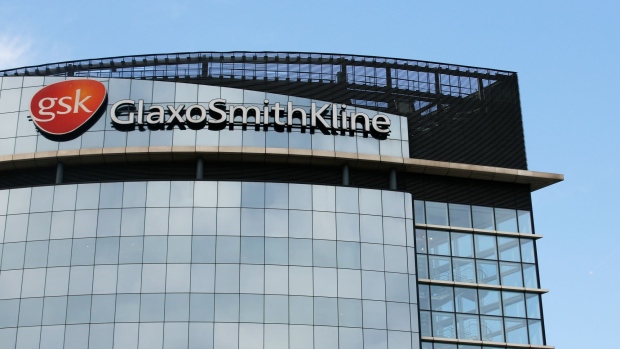 The headquarter offices of Glaxosmithkline Plc stand in the Brentford district of London, U.K., on Wednesday, Dec. 19, 2018. Glaxo paved the way for a split into two companies, agreeing to create a consumer-health joint venture with Pfizer Inc. that the pharma giants plan to list on the stock market. Photographer: Luke MacGregor/Bloomberg , Bloomberg

The U.S. Food and Drug Administration cleared the drug, called VIR-7831 or sotrovimab, for people older than 12 with mild to moderate infection who are at risk of progressing to severe Covid-19, the agency said in a letter on Wednesday.

The companies applied for authorization in March based on interim data showing the drug reduced hospitalization or death by 85% compared with a placebo. Europe’s drugs regulator endorsed the treatment for use in May and is conducting an accelerated review of the product in parallel to potentially support a full marketing authorization.

“As concern grows about the variants, we’re seeing more and more interest in the antibody,” George Scangos, Vir’s chief executive said in an interview before the authorization was announced. Discussions are happening with governments around the world including the U.S., he said.

Glaxo and Vir also reported positive results in March for low-risk patients from a study combining their antibody treatment with a drug from Eli Lilly & Co. The cocktail of VIR-7831 with Lilly’s bamlanivimab reduced the amount of virus present in patients with mild-to-moderate Covid infection by 70% after seven days.

All three companies have suffered setbacks with their antibody studies.

Authorization for Lilly’s drug on its own was revoked in April as concerns arose of reduced effectiveness against Covid variants; bamlanivimab is now cleared for use only in tandem with another Lilly antibody.

Glaxo and Vir halted a late-stage study in March looking at the effects of VIR-7831 in already hospitalized patients after an independent monitoring board raised concerns about the extent of the potential benefit.

The duo’s antibody treatment targets SARS and a whole family of coronaviruses, a broad range of activity that should mean new variants will be less likely to evade the treatment, according to Scangos. The therapy may have an advantage on how long it lasts in the body as well as lower dosing than other antibody products.

Vir says an injectable version is also being tested as current treatments are done by more onerous infusions.

AstraZeneca Plc is also testing an long-acting antibody combination to both treat and prevent Covid-19. Initial data from some of its five advanced-stage trials is expected in the coming weeks.

While Vir’s stock has peeled back from its late January record high as doubts over the need for new treatments arose on the heels of multiple vaccine approvals, Scangos is skeptical that the world can put Covid-19 behind it quickly.

“We’re going to continue to see a lot of infections for a lot of years,” Scangos said.