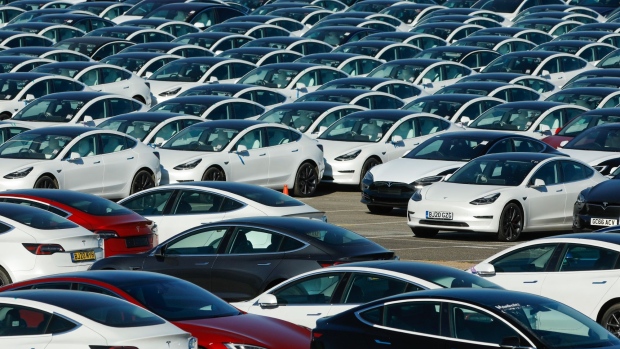 New electric automobiles, manufactured by Tesla Inc., sit on the dockside after being imported to the Port of Southampton in Southampton, U.K., on Thursday, May 14, 2020. Tesla asserts that restarting its operations in the midst of the coronavirus pandemic doesnt make the company an outlier, nor is it going against the grain. Photographer: Luke MacGregor/Bloomberg , Bloomberg

(Bloomberg) -- Glencore Plc will sell cobalt to Tesla Inc. for use in vehicles being produced at new car plants in China and Germany, according to a person with knowledge of the matter.

The deal could involve Glencore supplying as much as 6,000 tons of the metal a year for lithium-ion batteries that power electric cars, the person said, asking not to be identified as the details are private.

Details of the agreement to sell material for use at Tesla’s new factories was first reported by the Financial Times.

Executives from the two companies had previously been hammering out terms of a deal for Glencore to supply raw materials for vehicles being produced at Tesla’s car facility in Shanghai, people familiar with the matter said in January.

The agreement is in line with other recent contracts the trading giant-cum-miner has struck, including a four-year deal in February to supply as much as 21,000 tons to battery producer Samsung SDI Co. Ltd.

With Tesla’s China plant expected to manufacture 1,000 to 3,000 cars per week, that would translate to about 1,200 metric tons of cobalt demand annually at full capacity, BloombergNEF analyst Kwasi Ampofo said in January. LG Chem Ltd. and Contemporary Amperex Technology Co. have agreed to supply batteries for the Shanghai factory.

Tesla’s Germany plant near Berlin may produce about 500,000 vehicles a year once complete.

Tesla has begun “to engage directly with smelter and mines,” including in the Democratic Republic of Congo -- the key cobalt supplying nation, and home to some Glencore operations -- on standards around ethical and responsible production, the automaker said in a 2019 Impact Report released last week. The work comes as Tesla expands global vehicle production and extends supply chains, the report said.

The company said it will support sourcing of the metal from the DRC, where the industry has been dogged by concerns over the use of child labor, if it can be assured raw materials are coming from operations that meet social and environmental standards.