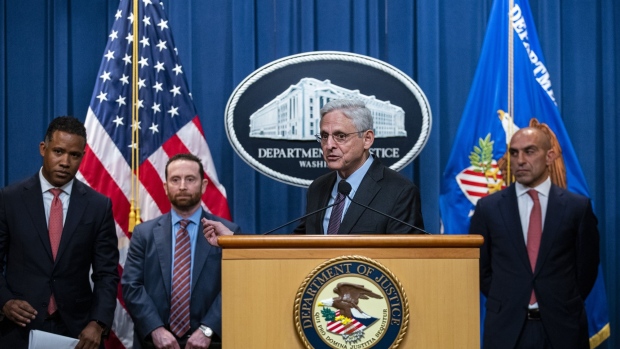 Merrick Garland, US attorney general, speaks during a news conference on the Foreign Corrupt Practices Act at the Department of Justice (DOJ) in Washington, D.C., US, on Tuesday, May 24, 2022. Units of Glencore Plc are pleading guilty to bribery charges as part of a sweeping settlement with authorities in the US and UK to resolve corruption probes that have hung over the commodities giant for years. , Bloomberg

(Bloomberg) -- The US corruption and market manipulation cases against Glencore Plc include allegations about the conduct of two former executives who formed part of the inner circle of the trading house’s top management for over a decade -- and walked away as billionaires.

The US government did not bring any charges against top Glencore managers in the sweeping cases against Glencore to which the company pleaded guilty this week. But in legal documents on Tuesday, the US said that two former top Glencore executives, one of whom is identified as the “global head of the oil group” and the other as a Greek and UK citizen who was a “senior executive” in the copper and zinc department, were personally involved in corruption.

The documents, which Glencore in one case accepted as true and in the other agreed not to deny as part of its guilty plea, state that a widespread and persistent culture of bribery wasn’t limited to local middlemen or rogue traders, but was perpetuated by some of the company’s most senior leaders. Both men had been at Glencore for decades and were some of the closest lieutenants of former chief executive Ivan Glasenberg before they departed about three years ago.

A slew of anti-corruption investigations has dogged the commodity trading industry for years, but has hardly touched the industry’s top executives. This is the first time in decades that the most senior echelons of the trading industry have been called out publicly by US regulators.

While US Attorney General Merrick Garland said Tuesday that holding individuals accountable was a priority in the Glencore case and more generally, the US secured guilty pleas only from two mid-level former Glencore traders, Anthony Stimler and Emilio Heredia.

But in legal documents filed by the Department of Justice and the Commodity Futures Trading Commission, the US made allegations about a number of other Glencore traders and executives, including Beard and Mistakidis.

“Glencore’s manipulative, fraudulent, and corrupt conduct involved traders and other personnel throughout its oil trading group, including senior traders, desk heads, and supervisors up to and including the global head of the oil group,” the CFTC said in an order as part of its settlement with Glencore. The company neither admitted nor denied the findings and conclusions in the CFTC order.

The global head of oil for Glencore during the period under scrutiny, from 2007 to 2018, was Beard.

The British trader worked at BP Plc before he joined Glencore in 1995 and became head of oil in February 2007. Known for his acumen trading Russian oil, he retired from the company in 2019 and had a net worth estimated at about £1.5 billion pounds ($1.9 billion) in the latest Sunday Times Rich List.

In a separate statement of facts, which Glencore admitted as “true and correct” as part of its guilty plea, the Department of Justice referred to the conduct of several Glencore executives, without naming them.

One individual, described as “Executive 1,” agreed to pay $14 million through a West African intermediary company in 2011, “knowing that the money would be used, at least in part, to pay bribes to Nigerian officials,” according to the filing.

The document describes “Executive 1” as a UK citizen who worked at Glencore from 1995 to 2019, and who “had responsibility over Glencore’s sale and purchase of oil worldwide” from 2007 to 2019. Beard fits that description.

Elsewhere in the same filing, the US said that “Executive 3” had been involved in a scheme to bribe officials in the Democratic Republic of Congo. The executive exchanged emails with Glencore’s agent in the country, in which the agent said “we need political pressure” to prevail in a contract dispute and suggested that a “reasonable amount of ammunition” would sway the case. A Glencore unit made a $500,000 payment a few days later.

The document describes “Executive 3” as a Greek and British citizen employed in Glencore’s copper and zinc department from 1993 to 2018. Mistakidis meets that description. Ebullient, charming and multilingual, he joined Glencore in March 1993, was appointed co-head of copper, lead and zinc in 2000, and retired in 2018. With estimated wealth of £2.5 billion, most of it coming from his stake in Glencore, he ranked 71st on the Sunday Times Rich List this year.

At a press conference on Tuesday, Kenneth Polite, Assistant US Attorney General, highlighted the guilty pleas of Stimler and Heredia.

He added: “These are complex cases, particularly when we have global partners. Where individuals may lie outside of the United States, we do coordinate with our law enforcement partners across the globe to ensure that those individuals are held accountable wherever they may sit.”