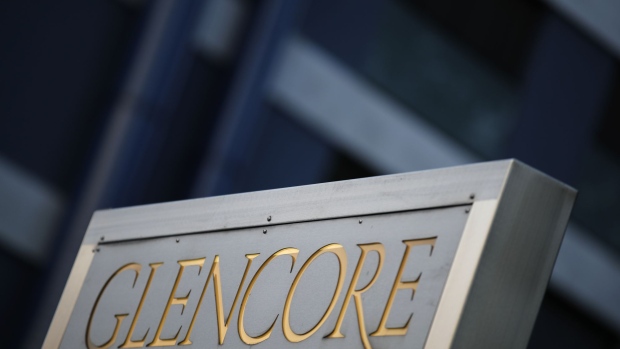 Signage stands near the Glencore Plc headquarters office in Baar, Switzerland, on Friday, July 6, 2018. Glencore will buy back as much as $1 billion of its shares, a move that may soothe investor concerns after the worlds top commodity trader was hit by a U.S. Department of Justice probe earlier this week. Photographer: Stefan Wermuth/Bloomberg , Bloomberg

(Bloomberg) -- Glencore Plc was sentenced to $486 million in fines and forfeiture for conspiring to manipulate US oil-price benchmarks.

The Swiss commodities trading firm, which pleaded guilty in May, was sentenced Friday by US District Judge Sarala V. Nagala in Hartford, Connecticut. She ordered Glencore to pay a $341.2 million fine and give up the $144.4 million that it made on the scheme, following the terms of its plea agreement, US prosecutors said.

Glencore admitted that, from 2012 to 2016, employees were directed to make bids and offers during a daily trading window that S&P Global Platts used to set its oil-price benchmarks.

The penalty is part of a the total $1.1 billion in fines and forfeitures Glencore has agreed to pay to resolve bribery and market-manipulation probes in the US, UK and Brazil. Glencore units agreed to plead guilty to a list of charges ranging from bribery and corruption in South America and Africa, to price manipulation in US fuel-oil markets.

Nagala delayed the sentencing in June to give Petroleos Mexicanos and its PMI Trading DAC trading arm additional time to claim restitution as a victim of the commodities firm’s fraud. Pemex settled its claim on confidential terms, both sides told Nagala on Sept. 12.

Glencore admitted in its plea agreement that employees were told to “talk the market” up or down to Platts reporters, who used the “color” in their market commentary. On one day in October 2014, Emilio Heredia, a former Glencore trader in San Francisco, told a Glencore marketer by text to “make sure you start talking the mkt down” for Los Angeles Bunker Fuel at a time when Glencore was buying it from PMI.

Glencore’s efforts helped push the bunker-fuel price down from $515 per metric ton to $471.50 in one day, inflating the firm’s profits from its trade by $2.1 million. In total, Glencore made $85 million from manipulating the market for fuel oil at the Los Angeles port, $23 million in Houston and split an additional $70 million in rigged proceeds with PMI, which was its partner in a joint venture.

Heredia pleaded guilty to conspiracy last year and agreed to cooperate with prosecutors. The firm’s plea agreement with the government also requires Glencore to cooperate with their investigation. The agreement doesn’t protect any individuals from prosecution “regardless of their affiliation” with Glencore.