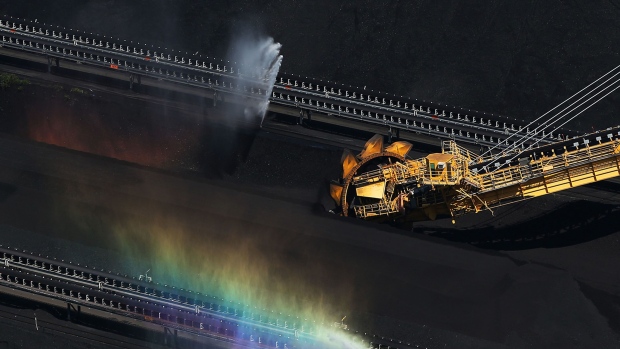 (Bloomberg) -- Glencore Plc abandoned plans for a controversial coal mine in Australia that would have been one of the largest in the top exporter, citing global uncertainty and its plans to phase out emissions.

The company won’t develop the A$2 billion ($1.3 billion) Valeria project in Queensland’s Bowen Basin, it said Thursday. The site would have produced about 20 million tons of coal a year, and been a major source of global carbon dioxide over its 37-year lifetime.

The move comes as major miners, including Rio Tinto Plc and BHP Group Ltd., pull away from carbon-emitting fossil fuels in favor of minerals necessary in the low-carbon energy transition, such as nickel, copper, lithium and cobalt. Hikes in Queensland state government’s coal royalty rates that “damaged investor confidence” were also a factor, Glencore said.

“This decision has been made in the current context of increased global uncertainty and is consistent with Glencore’s commitment to a responsibly managed decline of our global coal business and our ambition of being a net zero total emissions business by 2050,” the company said in a statement.

Glencore will close 12 of its coal mines from 2019 to 2035 as part of a plan to halve its scope 1, 2 and 3 emissions by that date, Chief Executive Officer Gary Nagle said earlier this week on an investor call, highlighting the company’s shift to metals needed in the energy transition. Glencore operates 26 coal mines, most of which are in Australia, according to its website.

“These will be responsibly shut with a proper just transition and proper environmental management and closure plans,” Nagle said. “We’ll prioritize our CapEx towards our future-facing metals. Clearly, that’s where the business is going.”

Valeria was one of the largest coal mines under review by the Australian government. It’s among a pipeline of almost 30 projects with total production capacity of about 250 million tons estimated to spew out as much as 17 billion tons of carbon dioxide over their lifetime, or more than half the global total in 2021.

(Updates with coal mine closures from fifth paragraph)