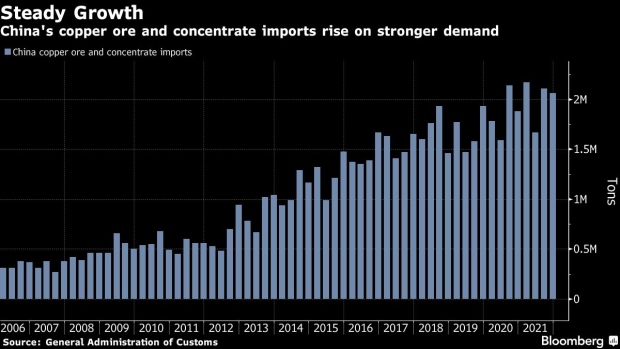 (Bloomberg) -- Glencore Plc is in talks with Chinese smelter Yanggu Xiangguang Copper Co. for a tie up that would allow the global commodities titan to supply copper concentrate to a blending facility in Shandong, according to people familiar with the situation.

Blending has been a valuable business for big trading houses, allowing them to transform undesirable cargoes with high levels of impurities like arsenic into products that can be easily processed by smelters. China places a hard limit on impurities in concentrates imports, so traders have traditionally needed to blend the cargoes outside the country in locations like Peru and Taiwan, before they’re sold to smelters for processing into refined copper.

If imported concentrates with higher levels of impurities could be mixed at port blending plants with “cleaner” material to meet China’s standards, it would potentially widen the country’s acceptance of overseas concentrates and help ease supply tightness.

Glencore is seeking to process ores in the plant, located in Qingdao’s tax-free bonded area, before delivering feedstocks of required standards to clients in the region, said the people, who asked not to be identified as the discussions are private. The negotiation is in its early stages and will require detailed checks, especially around compliance, they said.

A Glencore spokesman declined to comment. Xiangguang said information related to the matter should be subject to a published announcement from the company.

Xiangguang is one of the largest copper smelters in the country and was capable of producing 500,000 tons of refined copper a year as of March 2021, according to a report by China Lianhe Credit Rating Co.

Glencore, which has businesses spanning from crude oil to wheat and battery materials, has been looking for an opportunity to have a presence in copper-concentrate blending in China -- the biggest importer -- in order to be closer to clients and have flexibility to meet their demands for different grades. If a deal is agreed upon, it would optimize a facility that has largely been idled, according to two of the people.

(Updates with background on blending from second paragraph.)