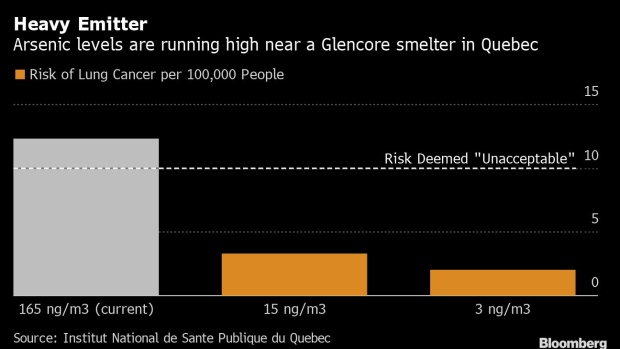 The Horne Smelter has for decades been at the center of the economy in Rouyn-Noranda, a small town 600 kilometers (373 miles) northwest of Montreal. A public health study from 2005 to 2018 showed that arsenic levels on site were 165 nanograms per cubic meter of air. That was 55 times the standard safe level of 3 nanograms.

Glencore’s investment will bring the arsenic level down to 15 nanograms by 2027, according to the plan announced Thursday by the company’s head of copper operations in North America, Claude Belanger. Last week, Quebec’s public health director said public-health objectives would be achieved at that level. “It’s the maximum we can do” considering the technical knowledge in place, Belanger said.

Among the changes, the plant’s operations will be modernized to reduce the number of steps, a high-capacity air cleaning system will be installed to capture dust and a new energy-efficient casting wheel will be built.

“It does not exist anywhere in the copper industry,” Belanger told reporters. “It takes time to develop projects like that. These are new technologies. We want to improve environmental performance.”

Glencore has found itself with a public-relations problem in Quebec over the high levels of pollution. Emilise Lessard-Therrien, a provincial lawmaker for the region, said on Twitter that emissions will not be reduced quickly enough and criticized Quebec Environment Minister Benoit Charette as a “company clerk” for Glencore.

The smelter will become clean enough to reduce arsenic levels to 3 nanograms or less in 84% of Rouyn-Noranda’s urban perimeter, according to the company’s plan.

Switzerland-based Glencore said it pours C$100 million of capital into the Horne plant every year to maintain operations. The copper smelter, the only one Glencore has in Canada, employs 650 people.

Asked if closing the factory had been considered, Belanger said he “always believed in the importance of the project.” But the company is in discussions with Quebec’s government to get financial help for the investment.