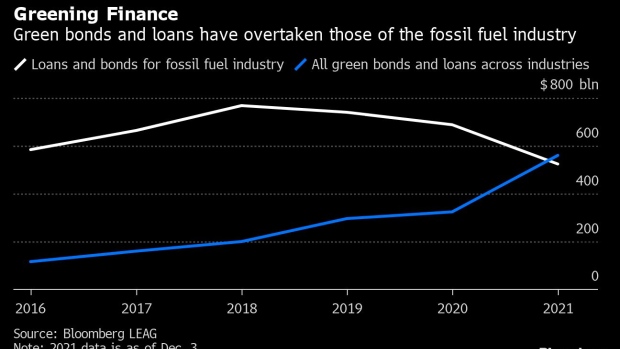 (Bloomberg) -- With the ink hardly dry on a landmark pledge by the finance industry to fight climate change, the world’s biggest banks are making clear they plan to stand by their fossil-fuel clients.

Take JPMorgan Chase & Co., the leading arranger of bonds for oil, gas and coal companies. In the weeks since the bank in October joined Mark Carney’s global alliance to achieve net-zero emissions from finance, it has underwritten some $2.5 billion in bond deals for companies like Gazprom PJSC and Continental Resources Inc., equivalent to the same period in previous years.

Wells Fargo, which Bloomberg data show as lending the most of any bank to fossil-fuel companies, is on track to double the amount of credit it has granted to the sector this year.

In total, global banks led by the Wall Street titans have helped fossil-fuel companies issue almost $250 billion in bonds so far in 2021, a figure that also broadly matches average annual fundraising for the industry since 2016. And while the International Energy Agency argues that funding for new oil and gas needs to stop now to avoid catastrophic climate change, bankers counter that polluters need help to transition to new sources of energy.

“You can’t just walk away, because the world is still heavily reliant on fossil fuels for the vast majority of our energy demand,” said Marisa Buchanan, global head of sustainability at JPMorgan in New York. “It is really important that our clients take steps to innovate and decarbonize, but we also need to bring capital to the table for the commercialization of those solutions.”

It’s an argument repeated across the financial industry. Most agree it’s necessary to fight rising temperatures, yet hardly any of the major global banks are willing to shun profitable fossil-fuel clients. Moody’s Investors Service estimates that banks, insurers and asset managers in the world’s 20 biggest economies still have about $22 trillion exposed to carbon-intensive industries. The rating company also says it’s a business model that puts banks at risk of losses as global warming progresses.

How quickly lenders pull off a transition to finance a lower carbon economy will play a major role in determining the planet’s chances of avoiding a cataclysmic degree of overheating. So far, executives are stressing that they don’t intend to ditch any clients soon if they can help it.

“The most important thing is to help our customers on the journey that they’re going to go on as they retool their industrial base from old technology, carbon-heavy, to new technology, carbon-light or carbon neutral,” HSBC Holdings Plc Chief Executive Officer Noel Quinn said in an interview on Bloomberg Television.

Meanwhile, scientists are issuing increasingly alarming warnings as CO2 continues to spew into the atmosphere. Even if the latest round of climate pledges pans out, the world is still on track to be a disastrous 2.4 degrees Celsius warmer by the end of the century, according to Climate Action Tracker.

For a lot of banks, pressure to re-orient lending and underwriting without losing business is feeding tensions in the boardroom. Executives at several major global banks, speaking on condition of anonymity, revealed that sustainability executives and commercial bankers are frequently at loggerheads over how to strike a balance between revenue and climate goals. Often, sustainability staff lose the argument, the people said.

In Europe, where politicians are aiming for the world’s most ambitious green finance rule book, a few banks are indeed beginning to say no to major clients. ING Groep NV pulled out of a revolving credit facility for German coal power generator RWE AG, according to people familiar with the matter. The 2019 decision, which the bank never made public, was triggered by environmental concerns, the people said. A spokesman for ING declined to comment on the decision.

Lenders that have already set up processes to deal with the conflict are more open about handling that tension between earnings and environmental goals.

“When we change or review our policies, we need evidence of the impact on potential revenue losses,” said Roberta Marracino, head of ESG strategy at UniCredit SpA, Italy’s second-largest lender. “There is an impact from a business point of view that has to be considered. It is considered also when we discuss specific deals and in specific cases we say ‘no, we won’t do it.’”

European banks also face climate stress tests next year that may indirectly result in higher capital requirements. And more regulatory scrutiny is focusing minds. But the transition toward a low-carbon future remains in its infancy, according to assessments by the European Central Bank.

Lenders have started asking clients for transition plans, including more detail on their carbon footprints. Yet according to executives at some of the most polluting companies, who declined to be identified by name discussing private conversations, the questions they’re being asked tend to be largely superficial.

In some cases, companies have simply pointed their bank to the web-link of a sustainability report in order to satisfy inquiries into environmental risk, according to officials at energy and industrial companies.

Still, the added scrutiny from regulators and the public means banks may be reluctant to ramp up fossil-fuel financing and overall funding may have peaked.

The volume of bonds arranged for the industry as well as the amount of bank loans granted are set to fall this year from last, when the pandemic boosted demand for cash. Banks are also implementing restrictive lending policies for the worst climate offenders, notably in coal mining, and are taking a more conservative view of dirtier power generation.

On top of the data presented here, banks are arranging financing tied specifically to green projects by fossil-fuel companies, although these firms still issue larger amounts of conventional debt. Investment bankers are making serious money from financing green projects across the whole economy, which this year overtook oil and gas funding for the first time.

That surge has coincided with skepticism around labeling, as green derivatives, repos and other lightly or unregulated products proliferate.

In the end, much of the financial sector has pledged to decarbonize balance sheets, but money from polluting industries is still flowing in. Bankers say civil society needs to be patient.

“Society needs to understand that we accompany transitions,” said Cornelius Riese, the co-CEO of Germany’s DZ Bank AG. “Our entire economy and ecology will have a problem if our industry is forced over 12 or 18 months to throw all the companies out of our portfolio that aren’t pure green.”