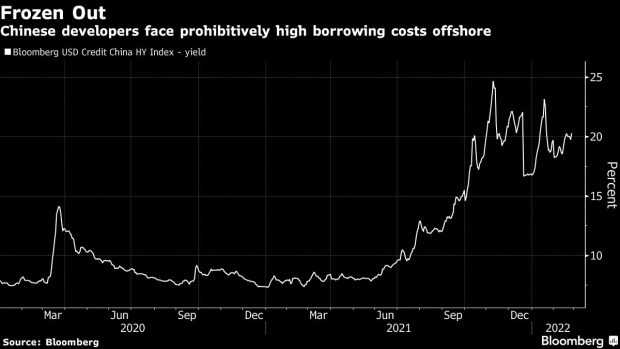 (Bloomberg) -- High-yield bond sales in Asia are off to their slowest start in six years as China property developers remain largely shut out of the market, dealing a blow to the top arrangers of these deals including HSBC Holdings Plc and JPMorgan Chase & Co.

Companies have raised just $2.41 billion in the region’s dollar junk bond market this year, compared with $21.9 billion in the same period last year. The drought extends a slowdown from 2021 when issuance plunged 42% in the second half from the previous six months to a five-year low, according to data compiled by Bloomberg.

Investment bankers see little sign of a turnaround this year as China’s restrictions on borrowing by property firms make it harder for them to tap the bond market, and as yields as high as 23% for speculative-grade debt make borrowing prohibitively expensive.

After at least a dozen defaults by property firms including giants in the offshore market like China Evergrande Group and Kaisa Group Holdings Ltd., banks are also facing a future without some of their most prolific borrowers. Chinese developers account for about half of the $288 billion in outstanding junk bonds in Asia, excluding Japan.

The lack of deals will “decimate” arrangers’ fees and desks may be “downsized, given there is little hope of a recovery this year,” said Charles Macgregor, head of Asia at Lucror Analytics in Singapore.

The Asian high-yield market has been lucrative for global banks in recent years especially since selling riskier debt typically brings in higher fees than deals for safer issuers. The junk-bond business has ground to a halt this year with just nine deals in the first two months, compared with 251 for all of 2020 and 241 last year, according to data compiled by Bloomberg.

Major international underwriters have so far maintained the size of their debt capital markets teams amid the drought, though at least three firms have told some employees to focus on different parts of the market, according to people familiar with the matter who aren’t able to speak publicly about their strategies.

One bank is looking to originate more bonds from other parts of Asia such as India, while another is targeting opportunities in the green debt market, the people said.

Global banks that have historically worked with a broad pool of industries and countries in Asia may be better-placed to make up for the junk-bond shortfall by selling debt for investment-grade issuers like state-owned firms and financial institutions.

“We’ve always run a pan-Asian high-yield strategy and while we’ve been active in Chinese commercial real estate, it’s never dominated our business,” said Haitham Ghattas, head of capital markets for Asia-Pacific at Deutsche Bank AG. “We further pivoted to focus on other parts of the market outside of real estate and into other geographies from the second quarter of last year.”

“HSBC has a more diversified debt-capital markets business than many of its competitors, making it more resilient to any shifts in market activity,” said Sean McNelis, global co-head of debt capital markets. JPMorgan and Haitong didn’t respond to requests for comment and UBS declined to comment.

Even as bankers shift their focus, overall issuance in the region is under pressure as borrowing costs and geopolitical tensions rise. The amount of cross-border corporate bonds outstanding in Asia-Pacific may fall this year for the first time in at least a decade, with net issuance expected to drop again in 2022, according to analysts at Fitch Ratings.

With the pipeline for Chinese junk deals running empty, some banks are looking to stressed developers for other business. Lenders have been working with companies on debt extensions, as firms scramble to avoid default by delaying repayment on maturing notes.

Credit Suisse Group AG was the solicitation agent on China South City Holdings Ltd.’s extension this year, having previously helped arrange sales of its dollar notes. Haitong International was involved in the exchange offer for Yuzhou Group Holdings Co. after working on its previous dollar bond sales. Banks compete with specialist restructuring advisers on these deals.

The banks may also try to win more solo deals to boost fees. Deutsche Bank, the top arranger for high-yield bonds so far this year, was the sole book runner on a $350 million sale of bonds this month for Studio City Co., a casino and hotel operator in Macau.