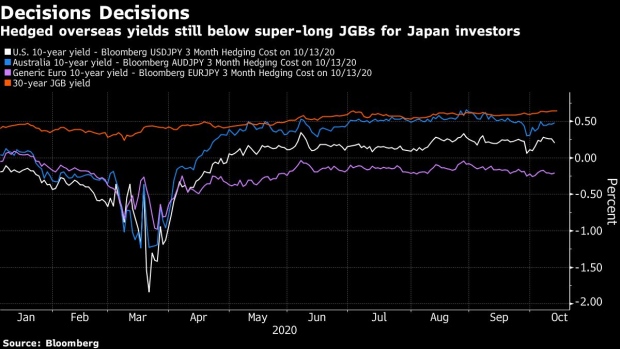 (Bloomberg) -- Global Treasury officials will be hoping Japan’s life insurers rediscover some enthusiasm for overseas bonds in their upcoming investment plans, after purchases fell to a seven-year low in the first half of the fiscal year.

Net purchases of medium- to long-term foreign bonds by insurers were just 266 billion yen ($2.5 billion), the lowest for an April-September period since 2013, according to data from the Ministry of Finance. They were net sellers for three months through September.

A collapse in sovereign bond yields after central banks slashed rates everywhere has made it more challenging than ever for the insurers to get returns on some $3.7 trillion worth of assets. The companies, with about a quarter invested in foreign securities, will announce second-half allocation plans later this month.

Lower hedging costs could lead to a return to overseas bonds, according to Shinji Kunibe, general manager of the global strategies investment department at Sumitomo Mitsui DS Asset Management Co.

“Overseas bond investment will likely pick up in the second half as their carry and roll income is rising slightly, and is more attractive compared to the first half or year ago thanks to a dramatic drop in hedge costs,” Kunibe said. “Unprecedented fiscal and monetary policy support globally makes any blip in yields a good buying opportunity.”

Japanese funds have bought record amounts of debt in Australia and Italy, where the sovereign yield curves are the steepest among major developed markets. Back in April, the biggest life insurers have also said they would be seeking to invest more in credit.

“They have to continue allocating a certain portion to overseas assets, so they may seek to further diversify regions or products that are less liquid and possibly increase alternatives,” said Eiichiro Miura, general manager of the fixed-income department at Nissay Asset Management Corp. That could also see more flows into credit and mortgages, he said.

Still, a steeper yield curve at home and low volatility could also entice them to invest more in Japanese government bonds, according to Sumitomo’s Kunibe. Japan’s 30-year bond yield has risen to 0.62% Friday from a low of 0.24% in March.

Insurers bought a net 3 trillion yen in super-long JGBs from April to August, the most in eight years for that period, according to data from the Japan Securities Dealers Association.

“They have scope to boost holdings not just for investment purposes but more to meet global regulations asking to match asset/liability durations,” said Koichi Sugisaki, a strategist at Morgan Stanley MUFG Securities Co. in Tokyo.

Though dominating newsflow, the impact of the U.S. presidential election on allocation plans is expected to be marginal, Nissay’s Miura said.

“It may affect their selection of stock sectors or in tactical decisions such as delaying the timing of purchasing risk assets,” he said. “But it’s difficult to see it overhauling insurers’ macro view on investments.”