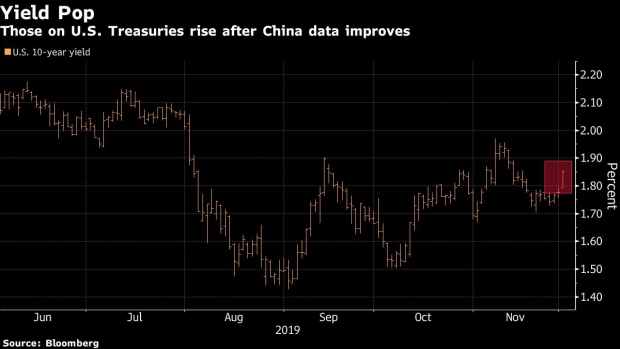 Worker inspect solar panels at a SunPower Corp. facility in Hillsboro, Oregon, U.S., on Wednesday, Aug. 7, 2019. Over the past two years, SunPower was hit with duties on panels it makes overseas; won an exemption; was threatened with tariffs on equipment it makes in Mexico; and watched rivals gain access to a tariff loophole. Photographer: Moriah Ratner/Bloomberg , Bloomberg

(Bloomberg) -- Global bond markets steadied from a heavy sell-off Monday as weak U.S. manufacturing data countered signs of recovery in other major economies, and investors got a reminder of the hurdles to a trade deal.

A pickup in factory data in China and Europe hammered government debt Monday, driving yields higher on hopes that global growth may be stabilizing. But while German yields surged, the U.S. 10-year rate peaked at a two-week high of 1.86% as a report showed an unexpectedly deep contraction in American manufacturing activity, and the White House re-upped the threat of increased tariffs on China this month.

Treasury bulls faced a rare disappointment in Monday’s market action: The contrasting forces left bonds halted in their tracks rather than rallying back. This year’s fruitful buy-on-dips strategy is harder to justify with the Federal Reserve reluctant to lower rates further, and amid signs that global economic data are improving. While the latest U.S. numbers suggest growth isn’t roaring back, a modest recovery in other big economies is helping to ease the recession fears that spurred the safest markets to massive gains this year.

His outlook for a slow-but-steady turnaround in global growth is reflected in Treasuries’ recent performance. A sell-off over the past month has eroded this year’s stellar returns. Yet yields are struggling to break above their ranges and the Bloomberg Barclays U.S. Treasury Index is still up 7.5% in 2019. That leaves it on track for its best annual performance since 2011.

The German yield rose as much as 5 basis points Monday to -28 basis points, helped by the prospect of more government supply this week. Ten-year Treasury yields settled around four basis points higher on the day at 1.83%. Since early August, they’ve ranged from a three-year low of 1.43% to as high as 1.97% in November, with the extremes triggered by speculation over trade talks.

Support for a more-sustained increase in global yields may be building, however, particularly on the political front.

Signs that Germany might loosen its grip on spending also weighed on debt, after a change in leadership within Chancellor Angela Merkel’s governing coalition.

Significant hurdles to increased spending remain, but the prospect has investors pondering an end to the supply scarcity that’s supported bunds over much of the past decade. German leaders have been facing increasing calls to boost outlays to support an economy that’s hovering above recession.

And the focus on fiscal efforts is widening to Asia as well, with reports of a $91 billion stimulus proposal in Japan and plans to fast-track infrastructure spending in New Zealand.

--With assistance from Stephen Spratt.

To contact the reporters on this story: Emily Barrett in New York at ebarrett25@bloomberg.net;John Ainger in London at jainger@bloomberg.net

To contact the editors responsible for this story: Benjamin Purvis at bpurvis@bloomberg.net, Mark Tannenbaum, Jenny Paris