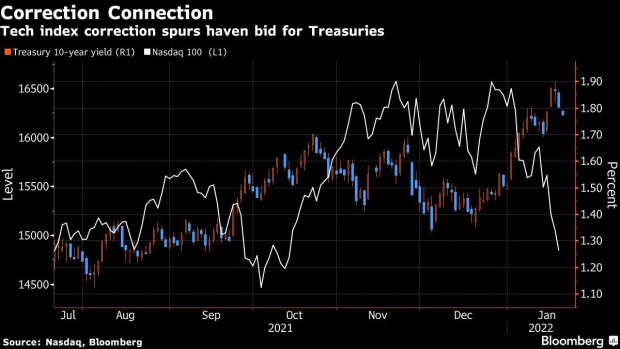 An electronic stock board outside a securities firm in Tokyo, Japan, on Tuesday, Sept. 7, 2021. The Nikkei 225 Stock Average touched a level above 30,000 for the first time since April as a reshuffle of the blue-chip gauge added to a wave of positive sentiment on Japanese equities. Photographer: Soichiro Koriyama/Bloomberg , Bloomberg

The yen climbed and the dollar strengthened against its major peers. Asian shares fell amid the risk-off sentiment and the Australian and New Zealand dollars retreated.

“We see the rally in bonds today as a function of stretched investor positioning, and some global risk-off due to continuing U.S.-Russia tensions around Ukraine, and as reflected in sharply weaker equity markets,” said Andrew Ticehurst, a rates strategist at Nomura Inc.

Global bonds are on track for their worst January since 2009, as speculation builds that the Federal Reserve could deliver more than a quarter-percentage point rate hike in March and then move to trim its balance sheet. But risk assets have stumbled too as investors baled out of expensive growth stocks with U.S. benchmarks bearing the brunt of the selloff.

Meanwhile, tensions over Ukraine are ramping up before a meeting scheduled for today in Geneva between the top U.S. diplomat and Russia’s foreign minister. President Joe Biden said Russia will “pay a heavy price” if any of its forces move across the border into Ukraine after earlier suggesting Western allies might struggle to react to a small-scale attack.