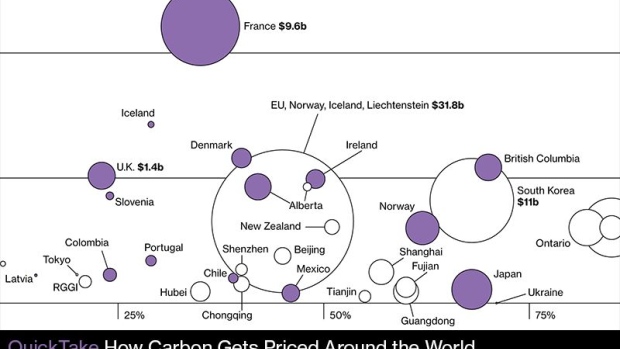 (Bloomberg) -- A Bank of England policy maker said adopting a global price on fossil fuel pollution could spur investment and productivity that would lift the world economy out of its torpor.

Catherine Mann, a member of the U.K. central bank’s Monetary Policy Committee, said that pricing carbon emissions everywhere could feed a fundamental improvement in productivity that would give a positive jolt to growth.

“Changing the rate of the relative price of carbon is a game changer for creating incentives,” Mann said at a web event hosted by the European Investment Bank on Thursday.

Her remarks suggest a way for policy makers to boost the potential growth rate, which has lagged in the past decade. While computer technology lifted productivity in the 1990s, those gains have been slower in recent years, with economists debating ways to deliver a new gains.

Mann has become an increasingly vocal advocate for global carbon pricing as a way to deliver on reducing emissions and stimulating growth. Last week, she called it a “holy grail” that could lead to “higher level of economic performance in the medium term” in addition to benefits for the climate.

“If you change the relative price of carbon, you have to change products, processes, workplace practices,” Mann said at the American Economic Association on Jan. 7. “You have got to invest in something different in order to change those three, and you’ve got to change consumer behavior as well.”

Such a shift would have to be global to have traction, Mann said, and that goal may prove elusive.

Envoys from almost 200 nations have debated a global framework for carbon markets for decades at the United Nations climate talks. They agreed on a rulebook for offsets last year, though previous attempts to create a global market have sputtered.

Carbon pricing emerged as a tool for controlling emissions in 1997, when the concept was endorsed at UN talks as part of the Kyoto Protocol.

Since then, carbon-pricing initiatives have sprung up in 65 jurisdictions, according to the World Bank. But the patchwork of systems each work differently and target pollution from different sources.