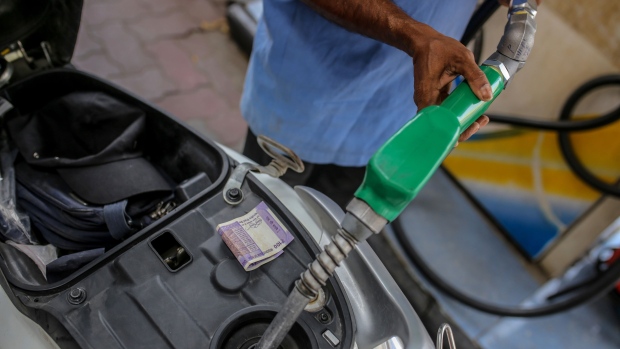 An attendant fills a motorbike with fuel at a Bharat Petroleum Corp. gas station in Hyderabad, India, on Wednesday, March 23, 2022. India’s urban consumption is driving recovery from late pandemic wave but has further intensified the divergence between cities and the hinterland, according to a report by Citigroup Inc released last week. , Bloomberg

(Bloomberg) -- Global buyers of commodities are on track to pay producers $5.2 trillion more in 2022 than they did in 2019 thanks to surging prices, according to a new base case analysis from Citigroup Inc.

That increase is the equivalent of 5% of world gross domestic product, the analysts wrote in a Monday note. In a scenario where forward prices for the second half of this year materialize, buyers would be paying $6.3 trillion more than during 2019, or 6.2% of GDP.

In either case, such a shock would be on the scale of what the world experienced during the early 1970s oil crisis, when taken as a share of global GDP, the analysis found.

“The longer the commodity shock persists, the bigger the negative impact on commodity consumers and on net, global growth and equities,” the analysts wrote.

They highlighted Europe and some emerging economies as among the most vulnerable to a growth hit if the shock stretches on, along with euro credit. South American currencies should benefit, they added.

A higher-for-longer scenario would fuel the risk of a recession in Europe and hurt European production competitiveness, the Citi analysts wrote. They estimated that commodity-driven inflation is already cutting European households’ real disposable incomes by 2% annually.

Though a commodities boom would have “both winners and losers,” they wrote, the impact would be bearish for consumption and global growth.

“The degree of bearishness will be dependent on the pass through to wages and the resulting policy response, and is likely to be partly offset by a revenue ‘recycling’ by producers,” the analysts wrote.