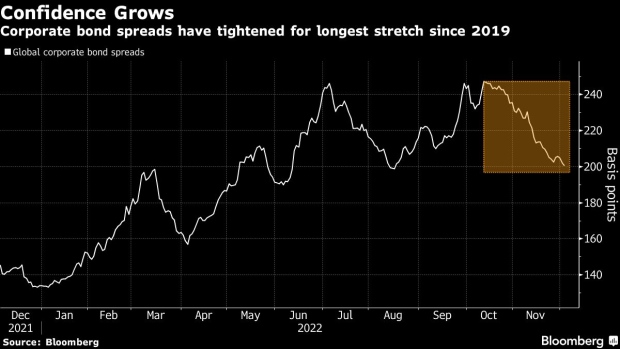 A pedestrian walks on Wall Street near the New York Stock Exchange (NYSE) in New York, U.S., on Friday, Oct. 19, 2018. The rebound in U.S. stocks lost steam as investors assessed the latest batch of corporate earnings and simmering geopolitical tensions ahead of the weekend. Photographer: Victor J. Blue/Bloomberg , Bloomberg

(Bloomberg) -- Global credit extended its longest rally since before the pandemic on Monday as investors cheered further reopening moves from Covid restrictions in China and stuck with bets for the Federal Reserve to down-shift rate hikes this month.

Yield premiums on Asian high-grade dollar bonds tightened at least 1 basis point Monday, according to credit traders, on track for a seventh consecutive session of tightening that would be the longest such run since June.

Globally, spreads including those for investment-grade and high-yield debt tightened for a seventh straight week to Friday, their best stretch since 2019, buoyed by signs that inflation in some parts of the globe including in the US may be cooling.

Chinese property developers’ dollar notes advanced as well Monday. The securities, most of which are high yield, climbed at least three cents on the dollar, traders said, lengthening their recent bounce amid additional support measures for the sector.

Still, global debt investors got a sharp reminder on Friday that the threat from inflation is far from over, with US wages surging by the most in nearly a year. That’s keeping pressure on the Fed to do more to subdue consumer price gains.

“Investment-grade credit should hold investors through as they take on more risk in other asset classes,” said Kristina Hooper, chief global market strategist at Invesco on Bloomberg Television after the jobs report. “Investors should remain relatively defensive but recognize that we are likely to see an improvement and a more risk-on environment.”

The stronger-than-expected jobs figures prompted traders to increase their wagers on where rates will top out in the current tightening cycle, to just below 5% in the middle of next year. They still expect the Fed to hike by 50 basis points later this month, down from four straight 75 basis-point increases.

--With assistance from Dorothy Ma, Ameya Karve and Kyungji Cho.