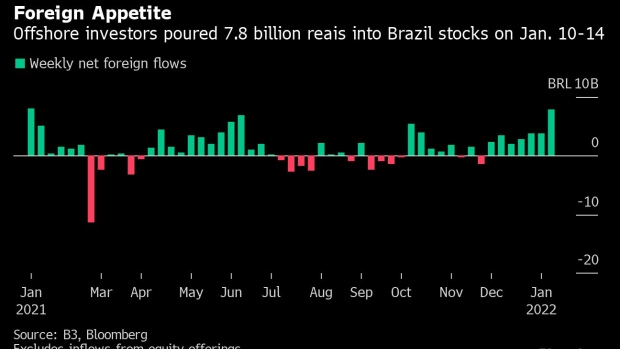 (Bloomberg) -- Offshore investors are putting money to work in Brazil’s battered equity market as they rush for exposure to commodity producers at depressed valuations.

Non-residents added about 7.8 billion reais ($1.4 billion) to Brazilian stocks last week, the biggest weekly net amount in a year, and more buying continued on Monday, according to exchange data compiled by Bloomberg.

One of the world’s worst-performing equity indexes last year, the Ibovespa benchmark gauge of 93 stocks trades at about 8 times forward earnings, the lowest in a decade. That compares with multiples of about 20 times for the S&P500 and 12 times for the FTSE 100.

At such low levels, Brazil stocks are well positioned for a rebound, analysts said.

Another driver has been the strength in global commodity prices, which has traditionally helped the likes of iron-ore giant Vale SA and oil producer Petroleo Brasileiro SA, which combined account for nearly one third of the benchmark index. Six out of the top 10 performers on the Ibovespa so far this year are commodity-linked.

“We’ve seen a lot of momentum in materials and energy sector shares around the world,” said Morgan Harting, a senior portfolio manager at AllianceBernstein in New York. “Brazil’s market is heavier in those sectors than most.”

Despite attractive multiples, the path ahead is unlikely to be smooth.

Still, for some like Mirae’s Dorson, potential political upheaval is well accounted for in the current prices for some stocks.

“There are enough inexpensive opportunities right now creating a margin of error where you don’t have to play the politics one way or the other,” he said.