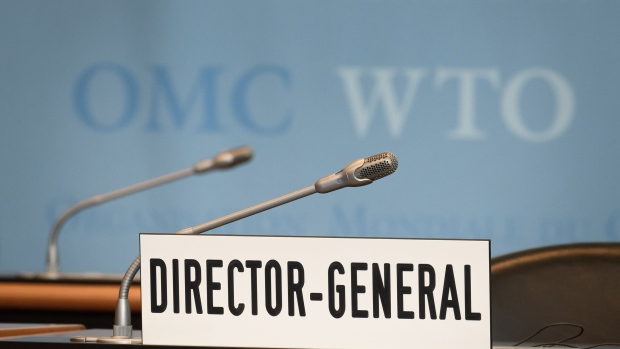 A picture taken on July 23, 2020 shows the empty seat and desk of the World Trade Organization (WTO) director-general prior to a general council in Geneva. Photographer: Fabrice Coffrini/AFP/Getty Images , Photographer: FABRICE COFFRINI/AFP

Two custodians of the global economy signaled that while the early days of pandemic recovery were stronger than expected in some countries and industries, a return to full health is likely to be longer and bumpier than they first predicted.

That outlook jibes with the view of the International Monetary Fund, which Managing Director Kristalina Georgieva said Tuesday will make a “small upward revision” to its 2020 global growth forecast next week and warn that the rebound may take at least a year longer. 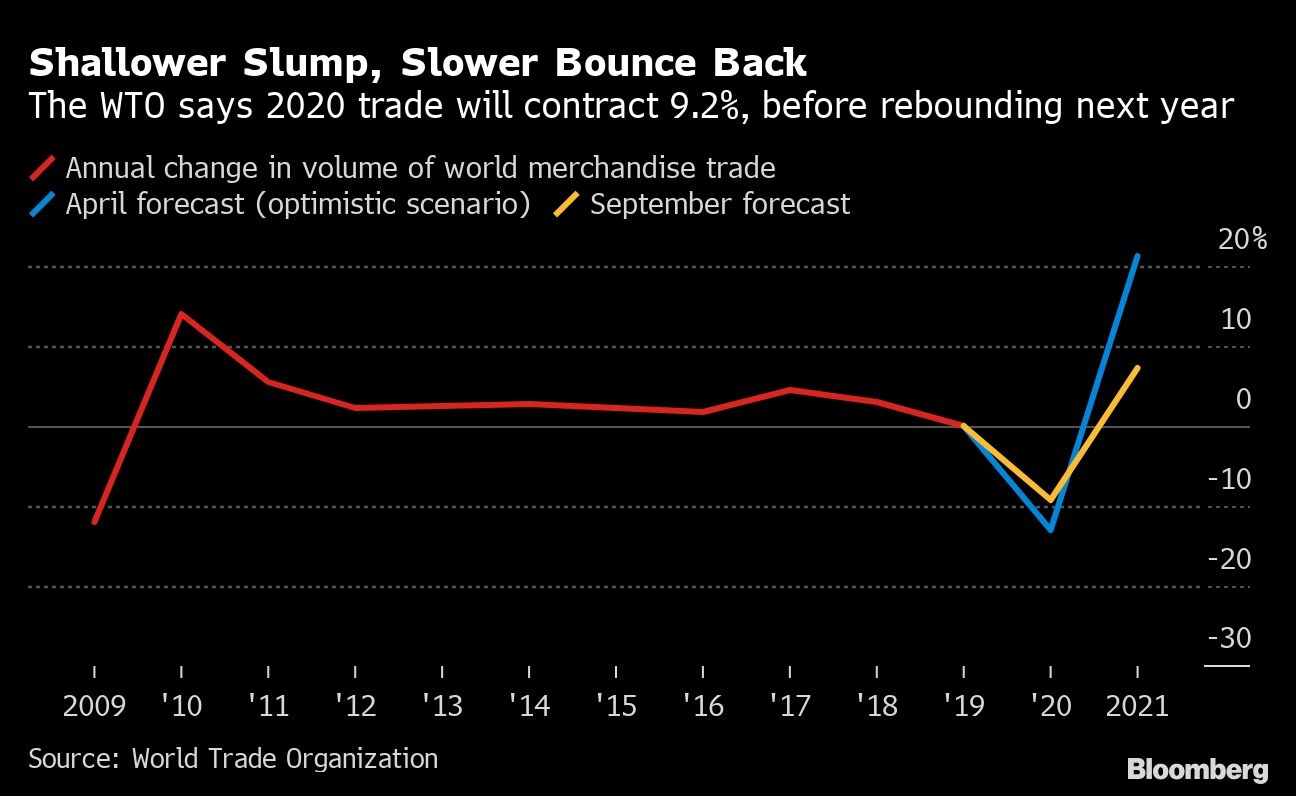 We expect global output to remain well below our pre-pandemic projections over the medium term,” she said. “For almost all countries, this will be a setback to the improvement of living standards.”

A deeper trade slump has been avoided this year, the WTO said, because of a surge in cross-border commerce in June and July after lockdowns were lifted, medical supplies met with strong demand and global economic activity accelerated.

The WTO warned that the current forecast could slip if there’s a resurgence of coronavirus cases in the fourth quarter or if nations resort to trade protectionism. The more sluggish rebound means global trade will remain below its pre-pandemic trend through 2021, it said.

“Worse outcomes are still possible if there is a strong resurgence of the COVID crisis in the coming months,” Deputy Director-General Yi Xiaozhun said during a press conference in Geneva. “One of the greatest risks for the global economy in the aftermath of the pandemic would be a descent into protectionism.”

The projections come as the summer’s nascent rebound in economic activity has begun to cool with the emergence of a second wave of infections in parts of Europe and the U.S.

Europe has struggled to keep the pandemic in check and COVID-19 cases in Germany are rising by the most since the initial wave hit in April. The U.K. government, meanwhile, has urged workers to stay home and announced tougher restrictions aimed at preventing an acceleration of infections.

The pace of America’s economic recovery is flagging, too, as job growth slowed and the virus spreads across much of the country. The economic pain may continue as long as U.S. lawmakers remain at loggerheads over a fresh government aid package.

The WTO said monetary and fiscal policies have helped prop up incomes and allowed consumption and imports to rebound once lockdowns were eased.

“Asian exports have been strong but for those exports to be maintained you need strong demand,” he said. “Much depends on government stimulus.”

The 14.3 per cent drop in global merchandise trade in the second quarter of 2020 marked the sharpest decline since the WTO began keeping records in 2005. The steepest drops were in Europe, where exports fell 24 per cent, and in North America, which saw a 21.8 per cent plunge.

Trade in most manufactured goods bottomed out in April before starting to recover in May and June, according to the report. Exports of automobile products saw the largest decline of all goods -- a 70 per cent drop in April -- due to supply disruptions and a lack of consumer demand.

“The decline would have been worse if COVID-19 was deadlier and governments had not acted to stem its spread,” WTO Senior Economist Coleman Nee said.