Canada with higher prices for commodities are a great thing, but could hinder the green energy: Theoret

The world is living through the first major energy crisis of the clean-power transition. It won’t be the last.

The shortages jolting natural gas and electricity markets from the U.K. to China are unfolding just as demand roars back from the pandemic. But the planet has faced volatile energy markets and supply squeezes for decades. What’s different now is that the richest economies are also undergoing one of the most ambitious overhauls of their power systems since the dawn of the electric age -- with no easy way to store the energy generated from renewable sources.

The transition to cleaner energy is designed to make those systems more resilient, not less. But the actual switch will take decades, during which the world will still rely on fossil fuels even as major producers are now drastically shifting their output strategies. 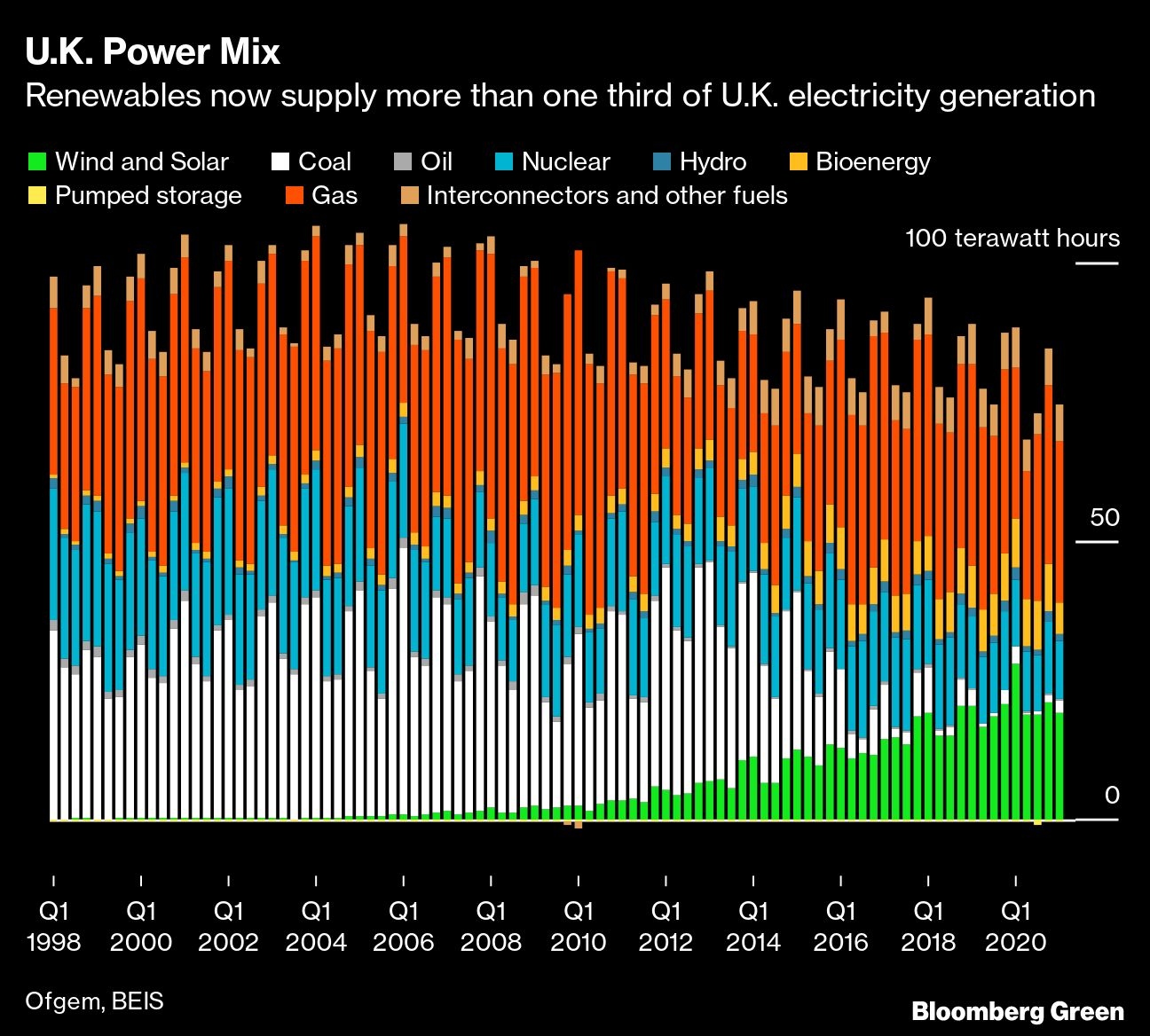 “It is a cautionary message about how complex the energy transition is going to be,” said Daniel Yergin, one of the world’s foremost energy analysts and author of The New Map: Energy, Climate and the Clash of Nations.

In the throes of fundamental change, the world’s energy system has become strikingly more fragile and easier to shock.

Take the turmoil in Europe. After a colder-than-normal winter depleted natural gas inventories, gas and electricity prices soared as demand from rebounding economies surged too fast for supplies to match. Something similar probably would have happened had COVID-19 struck 20 years ago.

But now, the U.K. and Europe rely on a very different mix of energy sources. Coal has been cut back drastically, replaced in many instances by cleaner-burning gas. But surging global demand this year has left gas supplies scarce. At the same time, two other sources of power -- wind and water -- have had unusually low output, thanks to unexpectedly slower wind speeds and low rainfall in areas including Norway.

In other words: A strained global gas market triggered Europe’s record-setting spike for electricity prices -- and the transition amplified it.

The pain hitting Europe is an ominous sign of the types of shocks that could strike more of the globe. Even as solar and wind power become increasingly plentiful and cheap, many parts of the world will for decades still depend on natural gas and other fossil fuels as backups. And yet, investor and company interest in producing more of them is waning.

That’s a good recipe for volatility, Nikos Tsafos with the Center for Strategic and International Studies, wrote in a recent analysis.

To be clear, the transition itself -- imperative for the planet -- didn’t cause the squeeze. But any big, complex system can become more fragile when it’s undergoing major change.

All this is happening at a time when power consumption is projected to increase 60 per cent by 2050, according to BloombergNEF, as the world phases out fossil fuels and switches to cars, stoves and heating systems that run on electricity.

Continued economic and population growth will also drive consumption higher. And as the world moves even more into all things digital, it will mean that this heightened vulnerability comes at a time when people need reliable power more than ever. 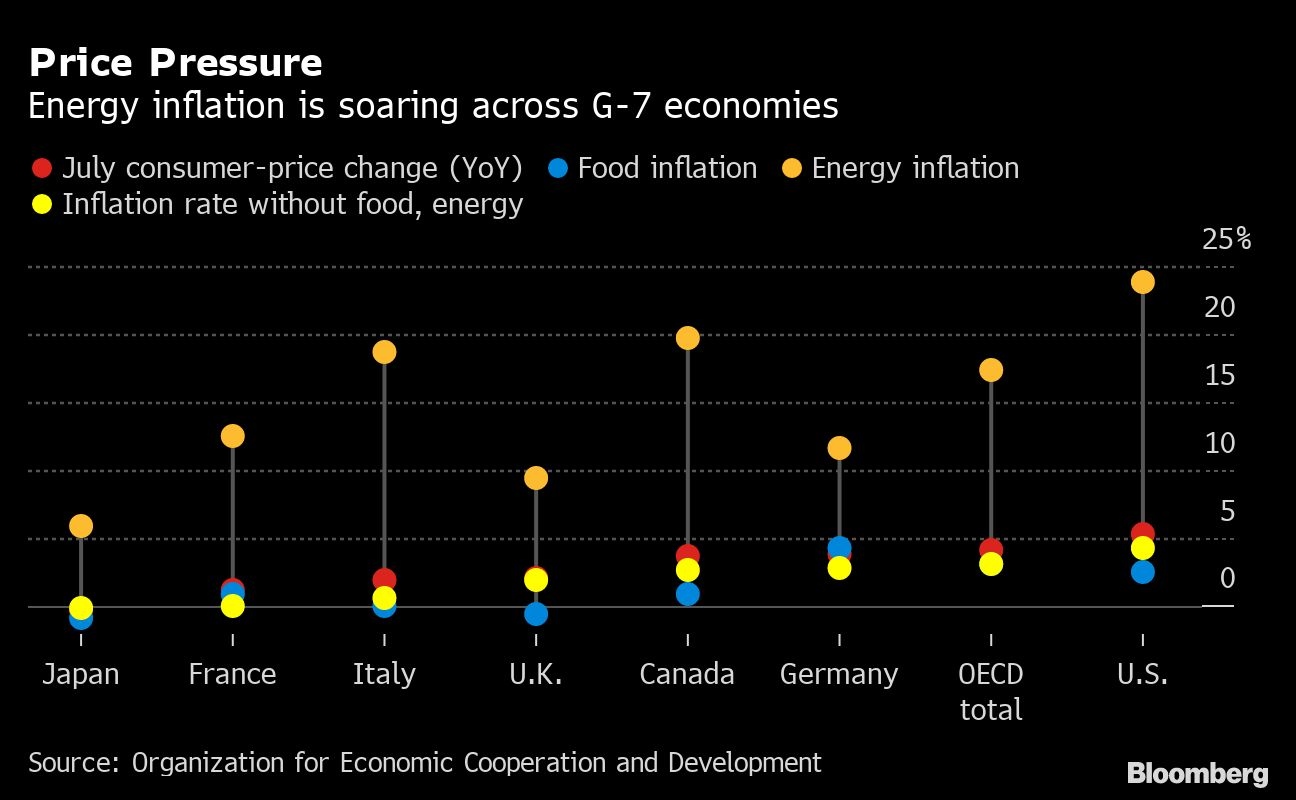 The surge in electricity demand combined with fuel-price volatility means the world could be in a for a rocky few decades. The consequences will likely range from periods of energy-driven inflation, exacerbating income inequalities, to the looming threat of power outages and lost economic growth and production.

The planet’s energy systems are interconnected, so the crisis and its spillover are being felt across the world. The crunch has had knock-on effects across industries, obstructing  silicon production, disrupting  food supplies and snarling supply chains.

In the U.S., natural gas futures have already more than doubled this year, before the peak demand that comes with the winter cold. With 40 per cent of the country’s electricity now generated by burning gas, those higher prices will inevitably push up electricity and heating bills.

In China, even as the government pushes to ramp up renewable power, the industrial economy still relies heavily on fossil fuels: coal, gas and oil. And when its factories started humming again during the pandemic rebound, the country simply didn’t have enough fuel. Chinese manufacturing contracted in September for the first time in 19 months, suggesting that soaring energy costs have become the biggest shock to strike the economy since the beginning of the pandemic.

China’s government is now vowing to stabilize the situation by procuring more overseas coal and liquefied natural gas. That puts the nation in direct competition with Europe, threatening to starve the continent of fuel and worsen that crisis.

There will be an inevitable fight over what exports are available, leaving some developing countries such as India and Pakistan worried they can’t compete.

As major Western producers from BP Plc to Royal Dutch Shell Plc work to reduce emissions and America’s shale drillers take a step back from expansion, the finite amount of exportable supplies is growing tighter.

Jeff Currie, global head of commodities research at Goldman Sachs Group Inc., points to underinvestment in fossil fuels as a big part of the problem.

Investors seeking the big returns that come from new businesses have been pouring money into alternative energy stocks rather than fossil fuel companies. Others are actively dumping coal and oil stocks, seeing them as a risk while the energy transition accelerates. And some fossil fuel companies have themselves started directing investments into the low-carbon future rather than focusing solely on their old role of finding, pumping and delivering more oil and gas.

Wind and solar power production have soared in the last decade. But both renewable sources are notoriously fickle -- available at some times and not at others. And electricity, unlike gas or coal, is difficult to store in meaningful quantities. That’s a problem, because on the electrical grid, supply and demand must be constantly, perfectly balanced. Throw that balance out of whack, and blackouts result.

So far, natural gas plants have served as the stable backup that wind and solar power need. That interdependence works fine, so long as gas prices aren’t going through the roof.

One of the biggest obstacles ahead will be storing power generated by intermittent wind and water sources. Solutions do exist, but it will be years before we have them at the scale on which they’re needed.

“The transition is both the challenge and the opportunity,” said Amy Myers Jaffe, managing director of the Climate Policy Lab at Tufts University.

Australia and California are plugging massive batteries into the grid to keep power supplies steady when the sun sets on solar plants. That deployment is just in nascent stages, and the batteries themselves are limited, usually supplying electricity for about four hours at a time.

Many countries and companies have pinned their hopes on hydrogen, seeing it both as a way to store energy and as a fuel for transportation and industry.

Hydrogen can be split from water using machines called electrolyzers powered by renewable energy, whenever it’s abundant. The process produces no greenhouse gases. The hydrogen can then be burned in a turbine or fed through a fuel cell to generate electricity -- all without carbon emissions. And unlike oil, gas and coal, such “green hydrogen” can be produced most anywhere there’s water and strong sun or wind.

The first wave of green hydrogen plants is still in planning stages. Many of the potential users -- heavy industries and utility companies -- are still studying whether the solution will work for them. The point at which hydrogen could underpin our global energy system, if it arrives, is likely years away.

In the short term, a warm winter across the northern hemisphere would bring gas prices down and allow storage fields to fill back up. But the current price spike has served as a reminder that even as the world is trying to build a new energy system, it’s still reliant on the old one.

“It’s not just about capacity of the amount of power we can get onto the network, it’s about the flexibility and the ability to deliver that power at the right time,” said James Basden, founder and director of Zenobe Energy Ltd., which is building Europe’s biggest battery.