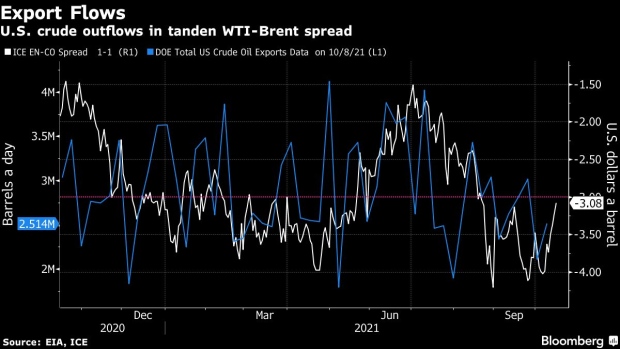 (Bloomberg) -- Asian demand for U.S. oil is rising as the energy crisis boosts prices for other crudes that are priced against the global Brent futures contract.

China and other Asian buyers have been snapping up supertankers of American sour crudes for delivery in November and seeking more for December, according to traders. Most buyers are seeking U.S. grades that had recently slumped to the lowest levels in over a year, with an added incentive after China’s government awarded millions of tons of crude oil import quotas.

Asia’s increased appetite for U.S. crude comes after a widespread recovery in road-fuel and freight activity and ahead of a winter that will likely see more oil demand from the power sector. This is also happening against a global supply deficit in fossil fuels that is driving higher prices.

Earlier Brent crude surpassed $85 a barrel Friday following months of production curtailments by OPEC and its allies in response to the pandemic. Saudi Arabia’s Energy Minister Prince Abdulaziz bin Salman reiterated this week the need for OPEC and its allies to take a gradual, phased approach to restoring output.

ESAI’s Murphy expects around 700,000 barrels a day in additional crude oil demand from Europe and Asia combined this winter due to the switch from natural gas to oil. With the help of a wide WTI discount to Brent, U.S. crude exports this month should reached 3.1 million to 3.2 million barrels a day, up from about 2.6 million last month, she said.

With the U.S. also entering its winter soon, the increase overseas demand would mean more competition for American refiners. Hurricane Ida has already caused a 30 million barrel loss in local supply, with some production only set to return next year.