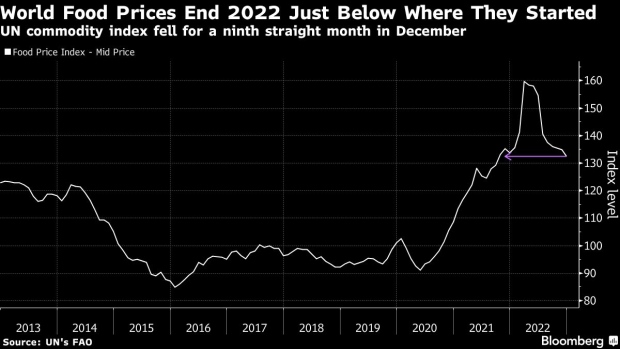 (Bloomberg) -- The world remains gripped by a historic food crisis as the war in Ukraine ripples across agriculture markets despite a drop in prices for key staples, according to US official Cindy McCain.

Food costs fell for the past nine months from a record in March to end 2022 roughly where they started, according to a United Nations gauge. Prices of fertilizers, a key expense for farmers, are also easing, amid hopes inflation may start to moderate.

“The fact that the food prices are going down does not mean this crisis is anywhere near being over,” said McCain, the US ambassador to the UN’s food and agriculture agencies in Rome. “We’re looking at some difficult times.”

As the war in Ukraine drags on, it continues to constrain flows of goods including seeds, with a sizable portion of Africa on the brink of famine, McCain said in an interview in London Tuesday. Damage to land and machinery in the country’s breadbasket has disrupted planting and shipments out of Ukraine are limited, she said.

In addition, “it’s going to be a tight year” in terms of funding for food security agencies and projects amid the widespread economic downturn, according to McCain.

“It’s the worst food crisis and the worst humanitarian crisis since World War II,” McCain said. “The Russians invaded a sovereign country. The only way to end this entire crisis and this war is for them to pull out and go home.”

McCain, the widow of the late US Senator John McCain, was appointed by the Biden administration to serve as the US permanent representative to the UN agencies in Rome, which is home to the World Food Programme, Food & Agriculture Organization and the International Fund for Agricultural Development. She is seen as a candidate to become the next head of the WFP, Axios reported in December, citing people familiar with the matter.