Wheat harvests are kicking off across the Northern Hemisphere, with analysts continuing to increase production estimates for some key growers like Russia after favorable weather. The US will give an update on its winter-wheat harvest progress later on Tuesday.

The prospect of recessions is also weighing on commodity prices, according to analyst Agritel. Subdued economies can mean lower fuel use or spur shoppers to cut back on higher-priced foods like meat. Chicago soybean oil is headed for its longest retreat since 2019, Paris rapeseed erased its year-to-date gain and Malaysian palm oil recently entered a bear market as rival producer Indonesia ramps up exports. 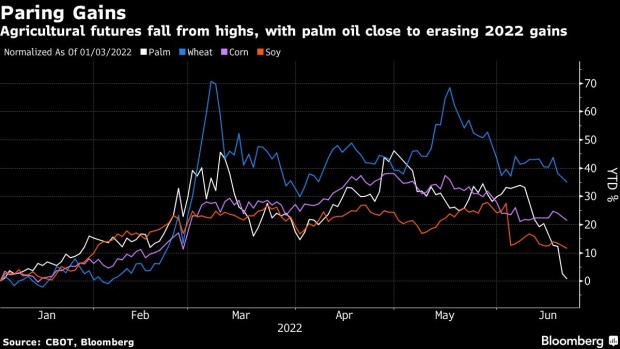 The declines may offer some relief for global consumers who face rapidly increasing living costs and growing food insecurity. The United Nations’ food price index has eased from a record high in March after Russia’s invasion choked exports from Ukraine, one of the top grain and vegetable oil shippers.

“There are signs that the global food crisis may be nearing its peak,” said Chua Hak Bin, an economist at Maybank Investment Banking Group. He added that palm oil’s slump will reduce the pressure on cooking oil prices.

Corn, wheat and soybean futures retreated in Chicago, as trading resumed following a holiday weekend in the US. Corn tumbled as much as 5 per cent to US$6.9425 a bushel, touching the lowest intraday price since March. Soybeans sunk to the lowest level since February, while wheat slipped below US$10 a bushel to touch the lowest price since early April.

Still, weather concerns linger with several major producers and Ukrainian exports continue to be curtailed by Russia’s invasion. Those could support prices later on.

“Market watchers will be eager to see if last week’s heat wave is going to take a bite out of weekly corn condition ratings” in the US, Farm Futures analyst Jacqueline Holland said in a note.

A European Union agency cut its outlook for the bloc’s soft-wheat yields to a below-average level in a report on Monday, following spring heat and drought. Dryness will also remain a concern across most of the US corn and soybean belt into early July, according to forecaster Maxar.