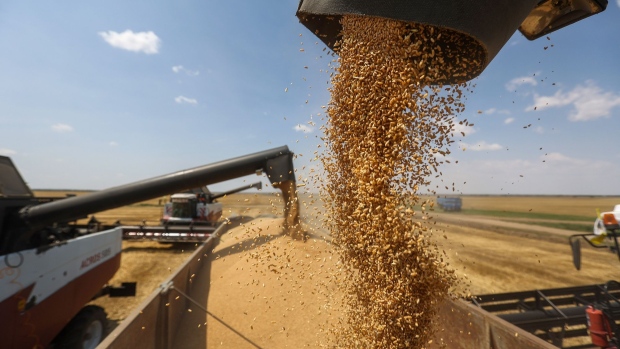 Acros combine harvesters, manufactured by Rostselmash OJSC, unload harvested wheat grain into a truck during the summer harvest on a farm in Tersky village, near Stavropol, Russia, on Friday, July 9, 2021. Farmers from Kansas to Kyiv are gearing up to collect abundant wheat crops in coming weeks, helping ease a global grain shortfall that’s fueled a surge in prices. Photographer: Andrey Rudakov/Bloomberg , Bloomberg

A United Nations index tracking staples from wheat to vegetable oils climbed 3 per cent to a fresh decade high in October, threatening even higher grocery bills for households that have already been strained by the pandemic. That could also add to central banks’ inflation worries and risks worsening global hunger that’s at a multiyear high.

Bad weather hit harvests around the world this year, freight costs soared and labor shortages have roiled the food supply chain from farms to supermarkets. An energy crisis has also proved a headache, forcing vegetable greenhouses to go dark and causing a knock-on risk of bigger fertilizer bills for farmers.

“The issue with the inputs and fertilizers and its implications for next year’s crop is a concern,” said Abdolreza Abbassian, a senior economist at the UN’s Food and Agriculture Organization. “By now, the market has factored in most of the supply and demand issues. But the market has by no means factored in next year’s prospects in production.” 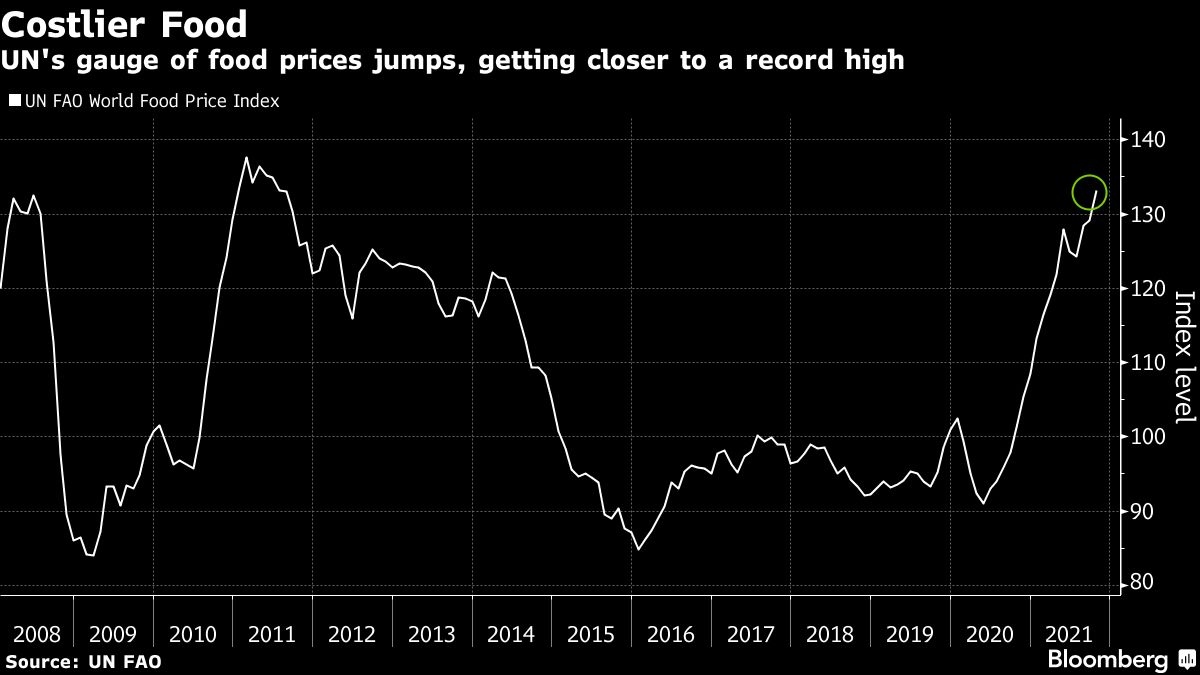 Some regions will likely continue to face food-security challenges. The UN on Thursday raised its outlook for global wheat trade to a record as purchases climb in Middle Eastern nations from Iran to Afghanistan. Droughts there slashed crops, boosting dependency on imported grain at a time when prices are soaring.

“This came at the worst time for those countries because world prices are just so high,” Abbassian said. “We cannot afford a bad year in 2022 for important crops.”

The price gains are stirring memories of spikes in 2008 and 2011 that contributed to global food crises. While it takes time for commodity costs to trickle to grocery shelves, officials in areas like North Africa and Turkey are already facing difficulties shielding shoppers from the blow.

Bigger expenses for farmers could also curb Northern Hemisphere plantings now underway, according to the FAO.

October’s food-price gains were mostly driven by higher costs for grains and vegetable oils, the FAO said in a report.

Still, there are signs of stabilizing prices for some foods, with with meat and sugar falling last month, Abbassian said. Global grain and oilseed supplies are proving sufficient to meet demand, and prices for rice -- one of the world’s vital staples -- remain subdued, he said.

“On the demand side, we’re beginning to get a better hold of what we actually need, so that uncertainty is perhaps diminishing,” he said.