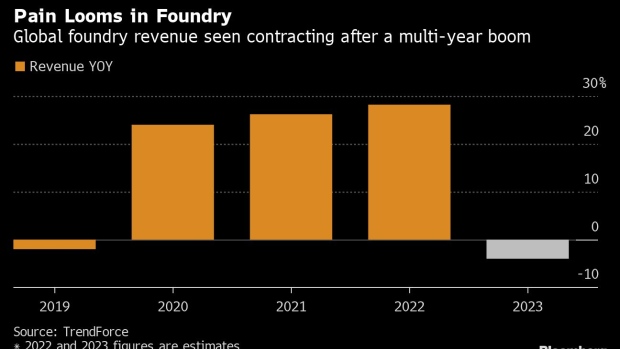 (Bloomberg) -- Revenues in global contract chipmaking, or foundries, are projected to fall this year as demand cools rapidly for the advanced chips that have bolstered Asian technology-driven economies Taiwan and South Korea.

As clients cut orders and manufacturing slows, foundry sales are expected to decrease 4% in 2023 from a year earlier, tech research organization TrendForce said Thursday in its latest projection. That would contrast with last year’s estimated rise of 28.1% year-on-year, and would be worse than 2019’s 1.9% drop.

Taiwan Semiconductor Manufacturing Co. and Samsung Electronics Co. hold the biggest slices of the foundry industry, fabricating chips to the specifications of companies that do not have chipmaking plants of their own. Major design houses are already this quarter cutting the use of wafers — the silicon slabs that transistors are printed on — with no signs of a significant rebound in orders, and foundries may see a deeper drop in demand next quarter, TrendForce said.

The gloomy projection underscores the pace of the global economic downturn. Central bank tightening is feeding through, China is trying to rebound from its Covid lockdowns and Russia’s war in Ukraine is continuing. Global tech giants are also cutting spending as pandemic-era demand in e-commerce and remote work fades.

“The state of the global economy will remain the largest variable” that will affect demand, TrendForce analyst Joanne Chiao said in the report. “The recovery of individual foundries’ capacity utilization rates will not occur as quickly as expected.”

The foundry industry — which includes production of Apple Inc.’s Silicon chips for iPhones and MacBooks — was worth almost $130 billion as of last year, TrendForce estimated. TSMC has a commanding lead with Samsung trailing as a distant second. The Korean rival still holds the title as the world’s biggest memory chipmaker.

Memory tends to be more vulnerable to a bust-and-boom cycle than the kind of advanced processors produced by TSMC. Samsung already recorded its largest profit drop in a decade last quarter.

Korea’s exports of semiconductors are likely to fall 15% this year compared with 2022, according to the Korea International Trade Association, indicating deeper trouble for the memory-chip market.