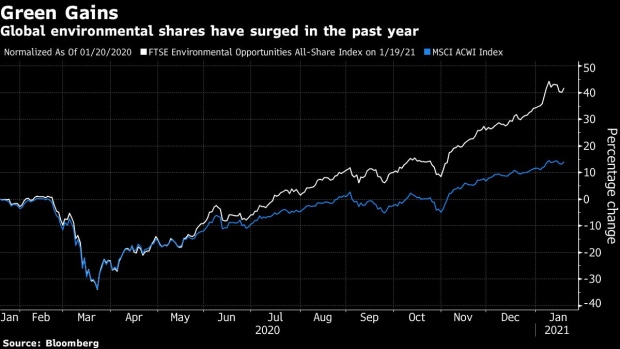 A wind turbine stands in a field of agricultural crops in this aerial photograph of farm land near Hamburg, Germany, on Tuesday, June 16, 2015. German investor confidence fell for a third month in a sign that risks from a Greek debt default to bond-market turbulence are stoking uncertainty in Europe's largest economy. Photographer: Krisztian Bocsi/Bloomberg , Bloomberg

(Bloomberg) -- A Melbourne-based global equity fund manager has raised climate-related issues to the top of his investment priority list as major economies and companies step up their environmental ambitions.

Climate will become one of the biggest growth areas over the next 20 years as entities from the European Union to Microsoft Corp. pledge to become carbon neutral, said Nick Griffin, chief investment officer at Munro Partners. The theme now accounts for 18% of the stocks in his Munro Global Growth Fund, up from under 10% as of September. The fund returned 41% last year compared with a 5.9% gain in the MSCI All Country World Net Index in Australian dollar terms, according to its website.

“The decarbonization of the planet is going to happen, period,” Griffin said in a webinar on Tuesday. “There are just too many stakeholders that are on board here.”

Investing focused on environmental, social and corporate governance issues has exploded globally amid the pandemic, an upsurge in retail investing and government stimulus. Clean energy and electric-vehicle stocks have climbed over the last few months, with Joe Biden’s U.S. presidential election win further bolstering the prospects for environment-friendly policies.

A flurry of countries and corporations have recently set zero carbon targets. Europe has said it aims to become the first climate-neutral continent by the middle of the century, while China set a deadline to end emissions by 2060. Microsoft last month joined a coalition of companies vowing to reduce its contribution to climate change.

While Biden’s victory boosted the fight against climate change, the world’s path toward carbon neutrality was already unfolding, Griffin said.

Assets in ESG exchange-traded funds more than doubled in 2020 to over $200 billion, driven by pension funds and millennial interest, according to Bloomberg Intelligence analyst Shaheen Contractor. And asset managers including BlackRock Inc. have touted the performance of their ESG investments.

The biggest contributors to gains in Griffin’s A$1 billion ($772 million) fund in the latest quarter included Danish renewable energy firms Orsted AS and Vestas Wind Systems A/S as well as Korean electric-car battery maker Samsung SDI Co., according to its latest performance report.