Shortages of natural gas in Europe and Asia are boosting demand for oil, deepening what was already a sizable supply deficit in crude markets, the International Energy Agency said.

Crude has surged above US$80 a barrel, the highest in three years, as traders anticipated that record gas prices would stimulate consumption of other fuels, particularly for power generation. That’s already happening and could add about 500,000 barrels a day to oil use on average over the coming six months, the IEA said on Thursday.

“An acute shortage of natural gas, LNG and coal supplies stemming from the gathering global economic recovery has sparked a precipitous run-up in prices for energy supplies and is triggering a massive switch to oil products,” the IEA said. “Provisional August data already indicates that there is some unseasonably high demand for fuel oil, crude and middle distillates for power plants across a number of countries, including China.”

The latest analysis from the agency, which advises industrialized countries on energy policy, shows how the acute shortage of natural gas is spilling over into other markets and the broader economy. The crisis is deepening the current oil-supply deficit, potentially disrupting OPEC’s careful plan to gradually revive idle production. It’s roiling energy-intensive industries and threatens to curb GDP growth and boost inflation. 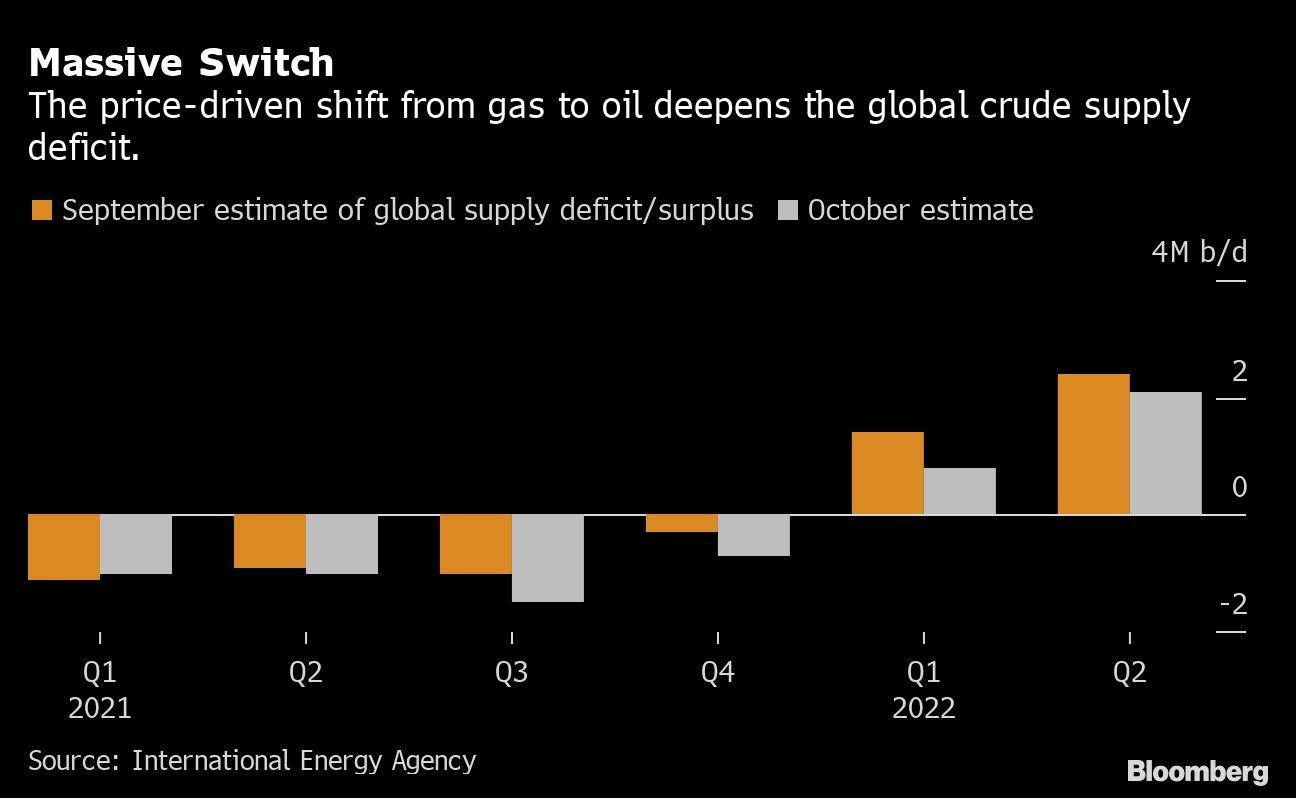 The gas crisis isn’t entirely a net positive for oil consumption. The increase in the IEA’s demand estimates was tempered by a weaker outlook for GDP resulting mainly from supply-chain issues and rising energy costs.

“The surge in prices has swept through the entire global energy chain,” the IEA said. “Higher energy prices are also adding to inflationary pressures that, along with power outages, could lead to lower industrial activity and a slowdown in the economic recovery.”

The agency noted that the Organization of Petroleum Exporting Countries and its allies stuck to their plan to boost production by 400,000 barrels a day “despite calls from major consuming countries for a more substantial increase.”

OPEC+ showed no signs of deviating from its plan. Speaking at Russian Energy Week in Moscow, Saudi Energy Minister Prince Abdulaziz bin Salman reiterated his commitment to a gradual and phased revival of idle supply. The crisis engulfing other energy markets shows what a good job the group has done in regulating oil, he said.

Global oil production will rise by about 2.7 million barrels a day from September to the end of the year as OPEC+ continues to unwind its cuts and U.S. output recovers from the damage caused by Hurricane Ida, the IEA said. Even with those additions, the market will be in a supply deficit of about 700,000 barrels a day for the rest of this year, before flipping back into surplus in early 2022, the IEA said.