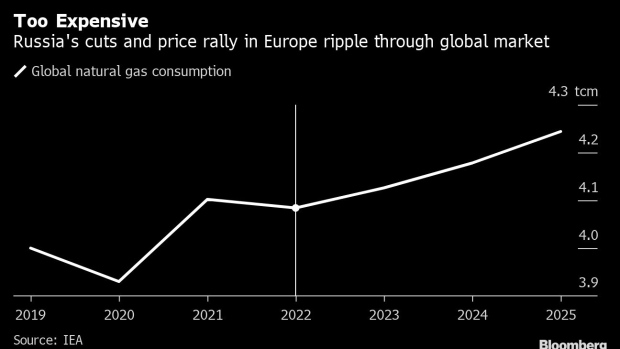 (Bloomberg) -- Global natural gas demand will sputter for the next three years, as soaring prices and the threat of further Russian supply cuts discourage consumption.

Gas use is expected to slip 0.5% this year as reduced economic activity in Asia and a sharp drop in European gas demand overshadows more buoyant markets in North America, the International Energy Agency said in its quarterly market report. Global demand growth to 2024 is forecast to shrink 60% compared with a previous IEA forecast.

“Today’s record prices and supply disruptions are damaging the reputation of natural gas as a reliable and affordable energy source,” the Paris-based agency said in the report. The downward revision of future growth is “mostly the result of weaker economic activity and less switching from coal or oil to gas.”

The outlook shows how hard the supply crisis in Europe has hit other markets. Russia -- historically the continent’s biggest gas provider -- slashed exports following sanctions against Moscow for the war in Ukraine, roiling markets as buyers sought other supplies. The tightening market means gas prices in the region are more than three times higher than a year ago, helping stoke Europe’s worst cost-of-living crisis in decades.

Europe’s rush to replace Russian fuel with alternatives such as liquefied natural gas has “led to an exceptionally tight global market,” the agency said in the report. Risks of further supply disruptions from Moscow can’t be ruled out.

“The current forecast is subject to unusually large uncertainty, due to Russia’s unpredictable behaviour,” the IEA said.

Read also: What LNG Can and Can’t Do to Replace Russian Gas: QuickTake

For now, Russian pipeline gas flows to Europe are expected to fall by 40% in 2022, with higher imports of LNG seen making up some of the shortfall. Meanwhile, fuel demand in Europe is forecast to decline by about 9% this year to below 2020 levels.

In Asia, demand growth slowed due mainly to Covid lockdowns in China earlier this year.

Global LNG trade is on course to increase by 5% this year, only slightly below the growth rate seen in 2021, the agency said. North America remains the primary driver on the supply side, even after a prolonged outage at major export facility due to a fire last month.

“Limited liquefaction capacity additions, together with strong LNG demand from Europe and lower Russian piped imports, indicate that the current tight market conditions may linger into the medium term,” the agency said.