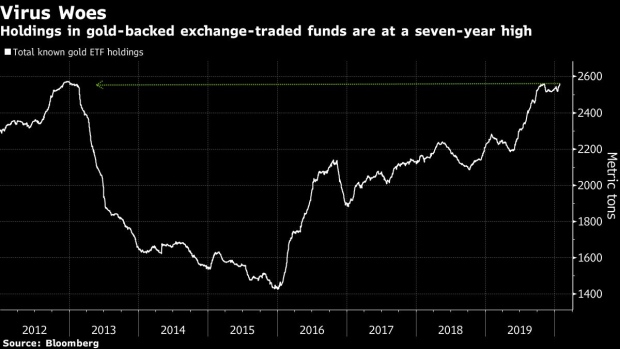 Molten gold hits the surface of the water to cool and produce gold casting grain during the refining process at the Valcambi SA precious metal refinery in Balerna, Switzerland, on Tuesday, April 24, 2018. Gold's haven qualities have come back in focus this year as President Donald Trump’s administration picks a series of trade fights with friends and foes, and investors fret about equity market wobbles that started on Wall Street and echoed around the world. Photographer: Stefan Wermuth/Bloomberg , Bloomberg

(Bloomberg) -- The global stash of gold held in exchange-traded funds has hit the highest level in seven years as the spread of the novel coronavirus spurs investors to beef up holdings of haven assets, and the addition of just a few more tons would lift the total to a record.

The latest influx follows four straight years of inflows into bullion-backed ETFs, and comes as prices trade near the highest since 2013. The number of confirmed virus cases in China has soared to overtake the official number of infections during the SARS epidemic, and at least 132 people have died.

Gold has risen this year as the outbreak of the deadly virus threatens to hurt the world economy, prompting volatile equity trading amid swings in investing sentiment. The traditional haven has also been in favor as the Federal Reserve has signaled that interest rates are likely to remain low for some time. Real U.S. rates are negative, which cuts the opportunity cost of holding bullion.

Worldwide gold holdings in ETFs rose to 2,561.2 tons as of Tuesday, the highest level since January 2013, according to data complied by Bloomberg. They peaked at 2,572.8 tons in December 2012.